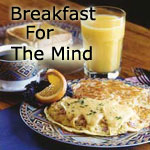 The Psychology Of Smoothies

Smoothies are easy to make. Just throw a bunch of stuff in a blender. That's great for the sake of ease. But for the sake of taste, the combination of "stuff" requires a little forethought.

I like to compare making smoothies to modern psychology.

I've always thought insanity could be measured in terms of extreme introversion and extroversion. Bums yelling at stop signs are extreme extroverts. People afraid of people, afraid to leave their homes, are extreme introverts. The politically correct term to describe the far sides of the spectrum is "disturbed".

To make a parallel with smoothies... If you throw a banana and a cup of milk in blender, you will end up with a bland, introverted smoothie. There's just not enough going on to justify the effort. On the other hand, if you throw in everything but the kitchen sink... bananas, chocolate, honey, a multitude of berries... you will end up with an overly extroverted smoothy... a hodge-podge that makes no sense.

The trick, as in life, is to find that spark of personality that still lives in the realm of the sane. As an experimental smoothyologist, I take the following approach. Create a base - for instance, bananas and milk. I blend them together with a couple extra ice cubes. I need my base to last a few minutes while I toy with it.

Take a teaspoon of your base and add an ingredient. I might place a couple of blueberries on the spoon and have a taste. Does it work? I add a drop of honey. Too sweet! I put the failing ingredient away until I'm ready to try with another base.

I once worked with very shy girl. She was nice, but awkward. One week I noticed that she was suddenly extroverted. Without directly asking, I tried to figure out why and engaged her in general discussion. While she was clearly more comfortable just "shooting the breeze", I was perplexed. Her mindset was strange.

My once shy coworker had found romance. Every third sentence began "My boyfriend says..." or "My boyfriend thinks..." Her balancing extroversion came from a source outside of herself. I was worried for her. When one's sense of self isn't based on one's self... one becomes wholly dependent on a fleeting perceived sense of self. If her boyfriend were to get a wandering eye and leave, where would my coworker be?

This same idea of "false extroversion" can apply to a smoothy. Let's use a blender as a metaphor for the stirring tides of relationships. A peanut butter and jelly sandwich with an icy glass of milk is an afternoon treat. But if you take peanut butter, jelly, bread and milk and puree it, you end up with a big glass of crap. Why? It doesn't make sense.

Or does it make perfect sense? In making our P & J smoothy, we failed to take into account the self worth of each ingredient. Maybe a dollop of peanut butter has enough pizzazz on its own to negate the need for the bread. The bread, like a no-good mate, can't seem to handle the ebbs and flow of the relationship - when things get stirred up, it breaks down.

It's "false extroversion" that makes spoon experimentation so important when inventing smoothies. If things work together on dry land, it's no indication that they will work together out to sea. Instead of throwing your relationship into turbulent waters off the bat, gently experiement to see if the union has what it takes.

Creating smoothies should be super fun. Just keep these ideals in mind: create a strong and reliable base; don't underestimate the strength of any single ingredient; and take small tastes before you commit to the end result.

Keep it sane and you'll have smoothie success every time.