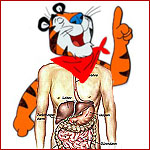 The Early Days Of Breakfast Cereal

"And after all this the LORD smote him in his bowels with an incurable disease. And it came to pass, that in process of time, after the end of two years, his bowels fell out by reason of his sickness: so he died of sore disease..."
2 Chronicles 21:18-19

When Tony the Tiger says, "They'rre Grrreat!" is he talking about his bowels? As strange as it sounds, he could be.

Experiments that resulted in our first breakfast cereals were all attempts to create foods that would help regulate the gastrointestinal system. In the late 1800's, your ancestors were eating a lot of pork and beef for breakfast. Since their diets were mostly devoid of fiber, gastrointestinal disorders were common.

The group of people who set out to fix this problem -- those responsible for cereal brands we still buy today - are real-life heroes -- as fantastically intertwined as the characters of General Hospital or Melrose Place - and they were on a mission from God.

In 1863, Granula may have been a healthier morning option than pork, but it wasn't particularly tasty or easy to eat. The world's first breakfast cereal was comprised of dense bran nuggets that had to be soaked overnight in order to be chewable. Their inventor Dr. James Caleb Jackson operated the Dansville Sanitarium in Dansville, New York. His staunch vegetarian heart was in the right place when he served his old-school health spa patrons Granula. But the cereal was destined not to last.

One of the patrons of Dr. Jackson's sanitarium was a woman named Ellen G. White. Led by a vision from God in which she was told human beings should reject meat, she went on to form the Seventh Day Adventist religion. She never created a breakfast cereal, but as destiny would have it, one of the members of Sister White's new church was a man named John Kellogg.

Like his cereal-developing forefather, Dr. John Harvey Kellogg's vocation was the health spa and hospital business. He was the superintendent of the Battle Creek Sanitarium in Battle Creek Michigan. While history has relegated John Kellogg's medical professional status to that of bowel-obsessed quack (see the novel and film based on his rein at the sanitarium, Road To Wellville), in his day he was considered a very skilled surgeon.

Also like his predecessor, John Kellogg was devoted to creating healthy food items for his patients. In 1887, he developed a biscuit made of oats, wheat and corn meal. He called a ground-up version of this biscuit Granula. Word of the great new food item quickly spread. When it reached Dansville, New York, Dr. Jackson considered his own Granula, preformed a pre-Industrial Age "Whah chu talkin' 'bout, John Kellogg" and sued his colleague for infringement on his brand name. A settlement was reached and the name was changed to granola, with an O. Granola was only the beginning of Kellogg's contributions to breakfast.

The bookkeeper and manger of the Battle Creek Sanitarium was John's brother, former traveling broom salesman, Will Keith Kellogg. The brothers worked together to develop more grain-based vegetarian options for the guests of the spa. Countless variations of granola were created and their coffee substitute was a hit, but their most famous contribution to breakfast was an accident.

In 1894, one of the foods they prepared was a wheatmeal. To make it, they would run boiled wheat through rollers to create a very thin cracker-type sheet. They would then roast the sheet and grind it into meal. It happened one night that the brothers left a batch of boiled wheat out and forgot about it. The next day, they ran it through the rollers to see if the stale wheat would be salvageable once it was ground.

What emerged on the other end of the rollers was to change the world forever. Instead of a unified flat sheet, the wheat came out as flakes, one for each wheat berry. They roasted the flakes and served them to their patients. They had an immediate success on their hands.

Before long, ex-patients of the sanitarium were requesting the cereal flakes via the mail. Will Kellogg fulfilled the orders and in so doing began a packaged food enterprise. Two years after the discovery of the wheat flakes they were calling Granose, Will successfully created corn flakes. He tried to persuade John that they should sell their discoveries to grocery stores, but John would have none of it. He believed such a blatant commercial venture might compromise his integrity as a medical professional.

Undeterred, in 1906, Will bought out his brother's portion of the cereal patents and went on to create the Kellogg Company. Led by Will's natural business savvy and shrewd advertising techniques such as 1907's "wink at your grocer and get a free box Corn Flakes" campaign, the new company reached annual sales exceeding one million cases of cereal by its third year of operations.

The sanitarium soap opera of cereal development doesn't end there. As it happened, a man named Charles William Post entered the Battle Creek Sanitarium in February 1893 to recover from a second nervous breakdown. While recuperating, he became impressed with the new healthy foods the Kellogg brothers were serving. He'd had an interest in coffee substitutes from earlier days in Texas where he'd tried a native chicory-based beverage.

The stay at the sanitarium didn't do much to improve his health, but it did manage to revive a passing interest in food development. By the following year, he had started his own Battle Creek-based sanitarium, La Vita Inn. There, he set to work on creating his own chicory coffee substitute and breakfast cereals.

Post, like Will Kellogg, was a natural at the young game of advertising. He launched the first nation-wide advertising campaign in the United States, and by 1897, the annual sales of his Postum coffee substitute had reached $840,000. A short time later, he began to sell his own Granula - we know it today as Grape-nuts - an easier to chew derivative of Dr. James Caleb Jackson's original cereal. Cementing C.W. Post's position as a cereal magnate was the successful release of his own brand of corn flakes, which he called "Elijah's Manna". The cereal was a big seller... once he changed the name to Post Toasties.

The breakfast cereal industry started with the best of intensions. Those of us who eat Grape-nuts and Corn Flakes may indeed have healthier colons and bowels because of these enterprising men. Certainly, a nice pork shoulder is better appreciated for dinner now that we skip it for breakfast. But we have to wonder what the principled John Kellogg might think of cereal today.

The C.W. Post Company went on to give us Super Sugar Crisp and Sugar Coated Rice Krinkles, while The Kellogg Company's healthy cereal flakes entered the realm of "Sugar Frosted Flakes". In 1953, Kellogg's introduced Sugar Smacks, aptly named because it contained 56 percent sugar.

Given the choice between a bowl of Sugar Corn Pops and Dr. Jackson's unchewable Granula bran nuggets, Dr. Kellogg might just decide that pork chops and a dirty colon weren't so bad after all.