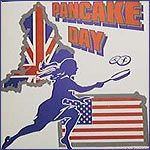 Pancake Day is real and there's a chance you already celebrate it. It's known by many names: Shrove Tuesday, Fat Tuesday, Mardi Gras, Carnival and Fetter Dienstag. But for those who routinely celebrate breakfast, it is better know as Pancake Day or Pancake Tuesday.

The unique holiday occurs annually the day before Ash Wednesday - the beginning of Lent. For Catholics, the "40 days" of Lent is a period of expected abstinence, recalling Jesus' 40 days in the wilderness. In days of yore, the devout were restricted from eating all meat and dairy products as part of a discipline of self-denial. The rules are a little looser these days. The items people give up now are generally matters of personal choice and can range from the grandiose like cigarettes and dirty sex to mundane items like chocolate or soda.

Pancakes came into play during the stricter days in England, Ireland and other European countries. In an effort to use up all of a household's eggs, fat and dairy products before Lent, it became customary for housewives to mix these perishables together to make pancakes.

In her paper, "Shrove Tuesday - Pancake Day!", Bridget Haggerty recounts just how ingrained pancakes were to the holiday in Ireland. "As children, we loved watching the pancake races. Usually the contestants were housewives. Each of them carried a skillet that contained a large, very thin pancake. The idea was for the women to run to the finish line, tossing the pancakes as they ran. It was hilarious."

In fact, such pancake races have taken place since 1445. At Olney in Buckinghamshire, England, women would run out of their homes upon hearing church bells. As it was Pancake Day, they would invariably be cooking pancakes at the time. Donned in aprons and continuing to toss their pancakes, women would run to church. The first woman to arrive at the chapel would receive a special prayer book and a kiss from the bell ringer. In return, the bell ringer would get to eat the winning pancake.

If a single woman dropped here pancake as she ran, the results could be devastating. A superstition dictated that she would not find a husband and would remain single another year. 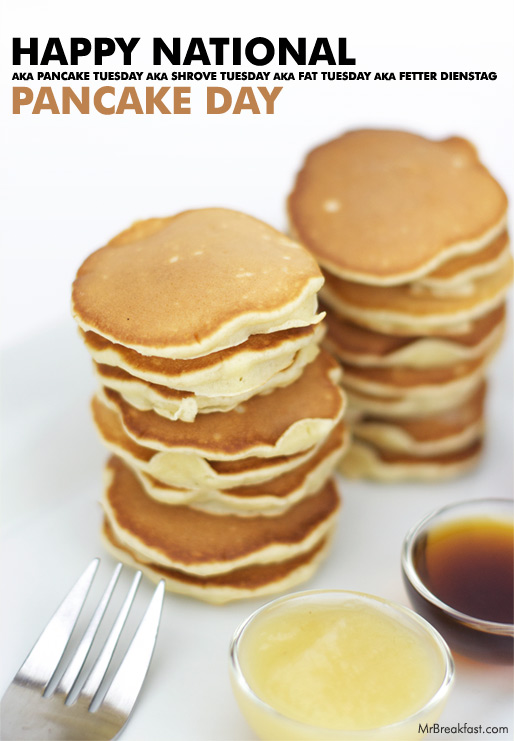 The name Shrove Tuesday is derived from the English word "shrovetide" which means to hear confessions. It was customary to confess your sins the day before Lent, which accounts for why so many women were running to church.

While distinct from Pancake Day, the French also celebrate a holiday which prominently features pancakes. On Candlemas - a holy day occurring six weeks after Christmas, a festival takes place where children wear masks and demand pancakes and fritters. The holiday marks the anniversary of the day Jesus was presented at temple by his mother. While the dates and historical reasons for the holidays differ, it is safe to assume that the pancake aspects of both Pancake Day and Candlemas share similar roots.

In 2020, Pancake Day is February 25th. In preparation for the Lent, those who celebrate the "feast before the fast" as Carnival or Marde Gras will begin to celebrate a full week early. Their feast will be short on pancakes and high on drunken debauchery.

As for those who still celebrate a more dignified pancake day, they are a dying breed. One Los Angeles man known as Mr Breakfast is trying to change that. Through his website, MrBreakfast.com, he is attempting to draw support to establish Pancake Day as legal holiday in the United States.

His road will not be an easy one. Falling into such close approximation to President's Day, it is unlikely that President Trump will grant another day off work for Government Employees.

"All the latest holidays are anniversaries of wars and tragedy. It just seems we are due for one that celebrates life."


Write to your state representative to demand Pancake Day be legally recognized.

Get your Pancake Day pancake recipes.