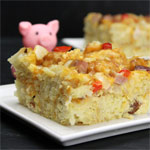 (6 servings)    Printable Version
The emphasis of this Ham'n Taters Breakfast Casserole is on the taters. In fact, it felt a little more like a hash brown side dish than a main course. I'd consider increasing the eggs to 10 and nearly doubling the cheese next time. This recipe is ripe for experimentation. I'd be great with half Pepper Jack cheese and a couple Tablespoons of dice jalapenos to create a Spicy Ham'n Taters Breakfast Casserole. It would also be interesting to replace the ham with cooked and crumbled sausage. As written, this a decent, satisfying dish that's incredibly easy to make. I give it a B+. (This recipe was submitted in 2002. It was tested and photographed in February 2016.) 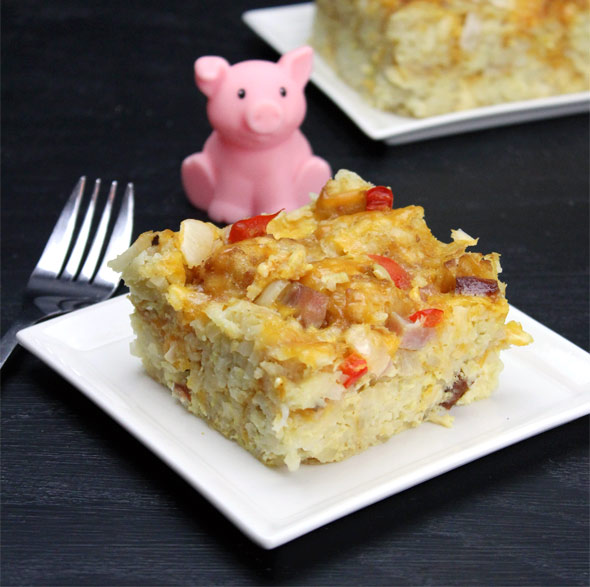 How To Make A Ham'n Taters Breakfast Casserole

In a bowl, beat eggs and milk. Sprinkle with salt and pepper to taste. Pour mixture over layers in the Crockpot.

Cover and cook on LOW for 9 to 11 hours (but please check after 8 hours just in case your Crockpot cooks faster than mine - cooking times tend to vary.) 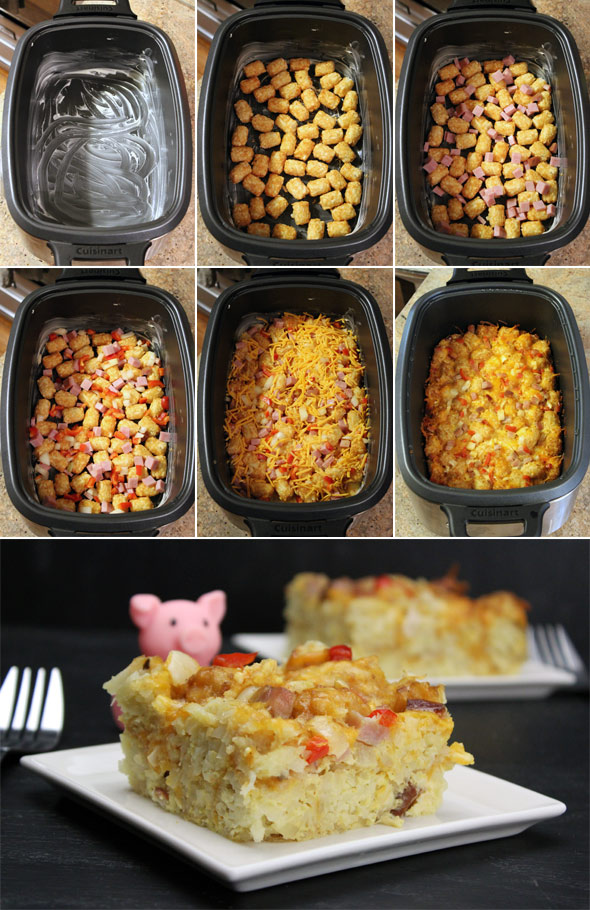 You'll get the best results from this recipe if you adjust the amount of ingredients to suit the size of your particular slow cooker. I'd suggest placing just enough tater tots to make a single layer each time. Same with the cheese. The egg mixture should just peek through the top. Beat a couple more eggs if the eggs aren't visible after being poured over the other ingredients.

Slow cooker cooking times are tricky. I used a large Cuisinart slow cooker. I cooked it on low for 2 hours, then switched it to warm when I went to bed. Mine was done in 8 hours. Generally speaking, slow cookers with a large bottom surface area cook hotter and quicker than smaller units. Definitely make sure to check the status of this dish after 6 hours.

If you're a hater of taters, stay away from this one. Otherwise, dig in! It's a Crockpot breakfast casserole with layers of taters, ham, veggies and cheese.


Comments About This Recipe
What do you think of Ham'n Taters Breakfast Casserole?
Overall Average Rating = 4 (out of 5)
Based on 5 votes.

From Spazzz
Mine was ready in 8 hours. Lucky, I got up early to check it. We liked it. I warmed up the leftovers for a late night snack and it was still good.

I am getting ready to try this out. Bought hash browns instead of taters. I know my crockpot cooks very hot even on low so I will watch it closely and give my review later. Thanks for the recipe in advance.

From MP in MS

Just wondering if it is really safe to slow-cook eggs for 10-12 hours considering your comment on keeping cooked eggs warm using a crockpot should not exceed two hours due to possible salmonella poisoning?

Yes I have 2 new cookers one 1 1/2 qt. another oval 4 qt. The small one boils everything on low. The big one works fine. I've seen a lot of similar complaints. I wonder if maybe they're using the same parts on the small ones as they do on the big ones in order to save money.

I'm going to make this but use a bag of the frozen cubed hash browns instead of the tator tots. Will also give it a whirl with cooked and crumbled sausage instead of ham, too!

From Jen NJ
Made this for a breakfast-for-dinner, and it was okay. Too much potato... and I love tater tots! I'd try it again and mess with the recipe... and season it more as well. But it was a good starting point!

I have a new crockpot that seems to be cooking LOTS faster and hotter then my old one and I was wondering if anyone here has had a problem with the breakfast foods being over cooked if left on low overnight for say 9 hours?

From Dina
What size crock pot? I have the 6 quart.

From Nathalie
I tried this as well and everyone loved it! I used more cheese, yellow peppers instead of green, 8 eggs and 1 cup of milk - cooked everything for 5 hours only, breakfast was terrific!

From randyt58
I tried this! Yum! Cooked it 10 hours and it was done just right. Browned just right top and sides. 15 minutes to prep, and ready to scoop when I got up. What a treat!