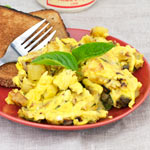 (3 servings)    Printable Version
This turned out great, but I made a couple adjustments to the recipe as submitted. I didn't have any cooked cubed potatoes laying around, so I used frozen cubed potatoes which had to be cooked for 12 minutes to get brown and crisp. I also used a green bell pepper instead of a red one. Beyond those changes, I made the recipe as stated and it was very good. A little grated cheese on top would have made it even better. (Recipe submitted in 2002. It was tested and photographed in November 2013.) 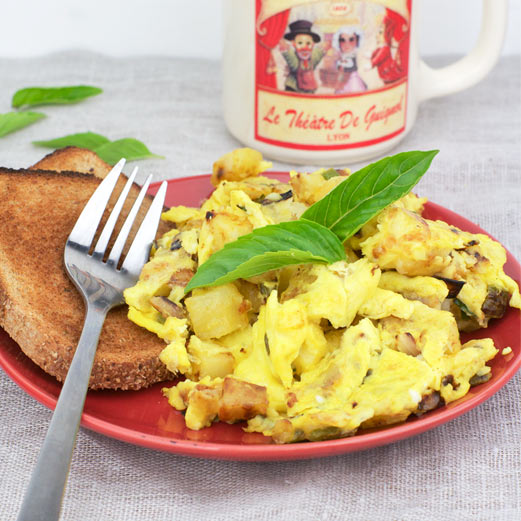 How To Make A Basil Veggie Scramble

Beat remaining ingredients until well blended; pour into skillet. As mixture begins to set at bottom and side, gently lift cooked portions with spatula so that thin, uncooked portion can flow to bottom. Avoid constant stirring. Cook 2 to 4 minutes or until eggs are thickened throughout but still moist. 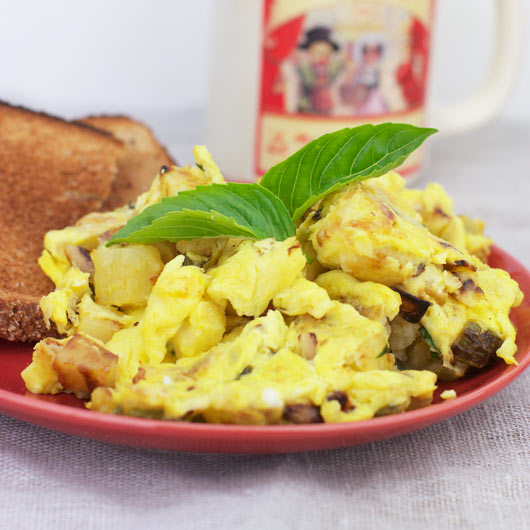 Two medium potatoes should give you the 2 cups of cubed potatoes needed. If possible use fresh basil. But you could always replace that with a teaspoon of dried basil.

This hearty scramble has eggs, potatoes, bell pepper and onion. Basil adds a fresh herb flavor while a pinch of cayenne adds a bit of heat.

Mr Breakfast would like to thank manduboyi for this recipe.


Comments About This Recipe
What do you think of Basil Veggie Scramble?
Overall Average Rating = 5 (out of 5)
Based on 1 vote.

From Cindy
Try this one. It's a recipe for a Bruschetta Scramble and it's AWESOME...

Note From Mr Breakfast: Hi Cindy - I hope you don't mind, but I took the recipe you posted here and gave it its own page so the formatting would look nicer. Thanks for posting it!