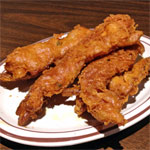 (8 servings)    Printable Version
I'll level with you. This recipe is fun, but you're going to feel disgusted with yourself if you eat more than 2 pieces. It's fried food gone berserk. If you eat 3 pieces, you can almost feel oil spreading through your arteries. I enjoyed trying this, but I'll probably never make it again. Bacon is such a wonderful thing on its own. The crisp country fried coating doesn't enhance the flavor of the bacon. It actually kind of hides the flavor and makes it taste like minute steak. Bottom Line: You'll want to try this because the concept is too good to be true. You might find it underwhelming. (This recipe was photographed in August 2015.) 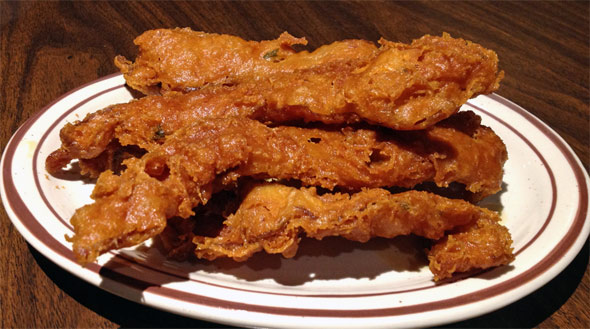 How To Make Chicken Fried Bacon

In a large shallow bowl, beat the eggs. Add the milk and whisk until well combined.

In another large shallow bowl, mix the flour and seasoned salt.

Soak each piece of bacon in the egg and milk mixture. Then, dredge it through the flour mixture until well coated. Repeat dragging through each mixture to double coat the bacon.

Carefully transfer the bacon (4 or 5 slices per batch) to the hot oil. Fry until golden brown - about 3 minutes. Place finished bacon on stacked paper towels to drain off excess grease. Allow oil to reach 360 to 375 degrees before cooking subsequent batches. 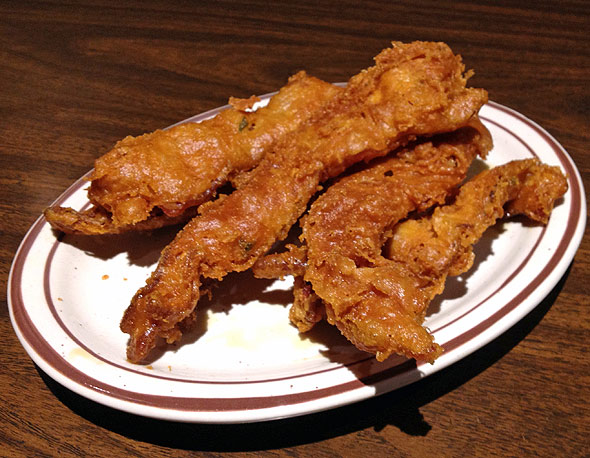 If you're using a dutch oven or a super large pan, you don't need to cut the bacon in half. However, the pieces will curl up a little in the oil and multiple pieces may stick together.

To serve all of your chicken fried bacon at the same time... transfer cooked pieces to a baking sheet and keep them warm in the oven at 275 degrees. The pieces should stay crisp and not get overdone as long as you serve within an hour.

You can make this recipe dairy-free and egg-free by skipping the egg wash. Instead, soak the bacon in lukewarm water for 20 minutes and then dredge it though the flour. The coating won't stick quite as well, but it works.

After I make my flour mixture, I set half of it aside. The flour tends to get wet and clumpy after a few batches. This way, you can refresh your flour mixture if it becomes hard to work with.

Thicker bacon works best for this recipe. Ideally, the bacon will be as thick as the coating for the flavor to come through.

Bacon goes berserk! An easy recipe where thick-cut bacon is deep fried and ends up with a crispy, country fried coating.


Comments About This Recipe
What do you think of Chicken Fried Bacon?
Overall Average Rating = 5 (out of 5)
Based on 3 votes.

From BaconBill
What I do, is, add some corn flour to the mix, and serve the finished product with county gravy.

From kernamo
Tastes great. I also did it with plain Bread crumbs and added salt and bacon. Amazing.