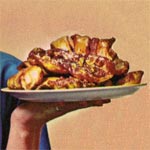 (12 servings)    Printable Version
This vintage recipe appeared in a promotional booklet for Fleischmann's Yeast in 1961 and in ads for the yeast around that time. Coffee Breakers are essentially cinnamon rolls in the shape of twists. The booklet also promoted Bisquick Baking Mix. Text above the recipe read, "Go ahead and bake-it-easy... that's why mixes were born! And now you can do wonderful new things with them, just by adding Fleischmann's Active Dry Yeast." The recipe has been updated slightly here to reflect modern cooking terms and techniques. 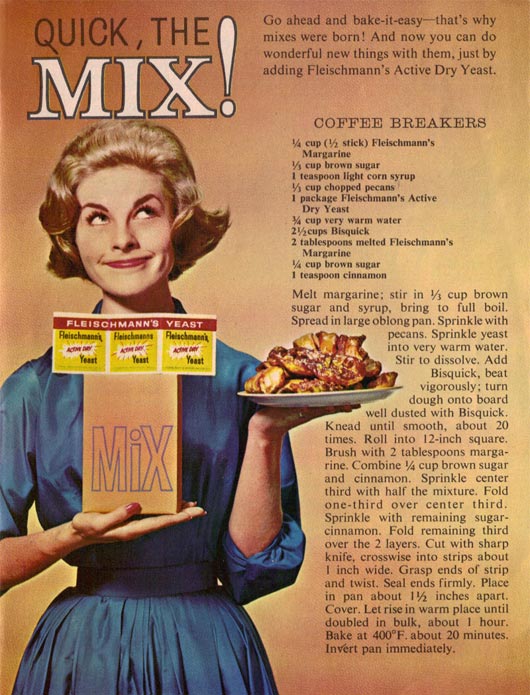 In a small saucepan over medium heat, melt 1/4 cup butter or margarine. Stir in 1/3 cup brown sugar and the corn syrup. Allow mixture to come to a boil and pour it out into a large oblong pan. Tilt pan to distribute evenly over the bottom. Sprinkle the pecans evenly onto of the mixture.

Pour warm water into a large mixing bowl. Sprinkle on the yeast and stir to dissolve. Add the Bisquick baking mix and beat vigorously until completely combined. Turn the dough onto a board that's been dusted with flour or Bisquick. Knead dough until smooth - about 20 times.

Roll dough into a 12-inch square. Brush with the 2 additional Tablespoons of butter or margarine. In a small bowl, mix together the brown sugar and cinnamon.

Cut with a sharp knife, crosswise into strips about 1-inch wide. Grasp ends of each strip and twist. Seal ends firmly.

Place strips - about 1 and 1/2 inches apart - in the pan on top of the pecans. Cover pan loosely with plastic wrap. Let rise in warm place until doubled in bulk - about 1 hour.

Bake at 400 degrees for about 20 minutes. Invert pan onto a serving platter while pan is still very hot. 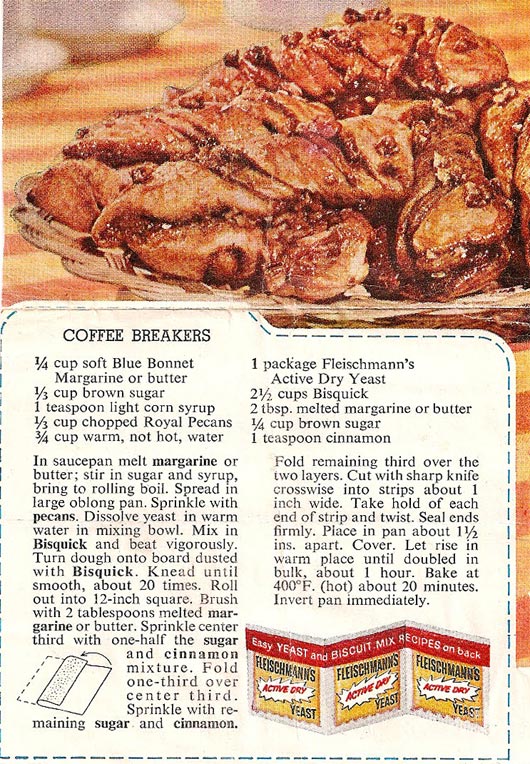 To make your own baking mix instead of using Bisquick:

Place 2 and 1/4 cups all-purpose flour, 1 Tablespoon baking powder and 1/2 teaspoon salt in a mixing bowl. Cut in 2 Tablespoons of shortening with a pastry cutter.

A vintage recipe from 1961 from Fleischmann's Yeast for an interesting 'twist' on classic cinnamon rolls.


Comments About This Recipe
What do you think of Coffee Breakers (Twisted Cinnamon Rolls)?
There are no comments yet for this recipe. Be the first! Was it good? Was it bad? Did you make it better somehow? Let the world know!