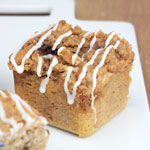 (12 servings)    Printable Version
I called this recipe Starbucks-Style Cinnamon Coffeecake because that's what I was shooting for when I put it together... something very similar to the coffee chain's Classic Coffee Cake. I experimented with different cakes, crumbles and fillings until I found the best combination. I'm happy to report that everyone who tried this coffeecake said it's even better than Starbucks. My favorite review said, "More moist and indulgent... it makes the Starbucks one seem boring." I finished the coffeecake off with an optional vanilla drizzle. You can find instructions for that below. (This recipe was developed and photographed in April 2013.) 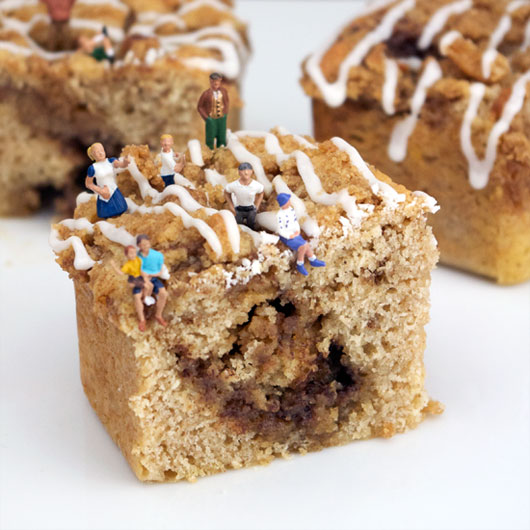 How To Make A Starbucks-Style Cinnamon Coffeecake

Preheat oven to 350 degrees. Prepare a 10-inch baking pan by coating with cooking spray or butter and then dusting very lightly with flour (tap out excess flour).

In a medium bowl, sift together the flour, cinnamon, baking powder and baking soda.

In a large bowl, lightly beat the eggs. Add the sugar, sour cream, softened butter and vanilla. Beat until well combined - about 1 minute using an electric beater on medium. Gradually add the flour mixture and stir it in gently with a firm spatula. Avoid over-mixing when combining the wet and dry ingredients.

For the filling: In a medium bowl, beat the butter until light and fluffy. Add the brown sugar, cinnamon and cocoa powder and continue beating until fairly smooth and well combined.

Spoon 1/2 of the cake batter into the prepared pan and spread it to an even layer with a spatula. Sprinkle the filling mixture over the layer of batter. Cover that with the remaining cake batter.

Make the topping by placing all topping ingredients in a food process and pulsing until very crumbly (similar to the texture of bread crumbs). If mixing by hand, use a pastry cutter or the back of a fork.

Sprinkle topping mixture evenly over the ingredients in the pan.

Bake for 1 hour at 350 degrees or until a toothpick inserted into the center of the cake comes out dry (ie. no uncooked batter sticking to the toothpick).

Allow coffeecake to cool at least 15 minutes before serving. 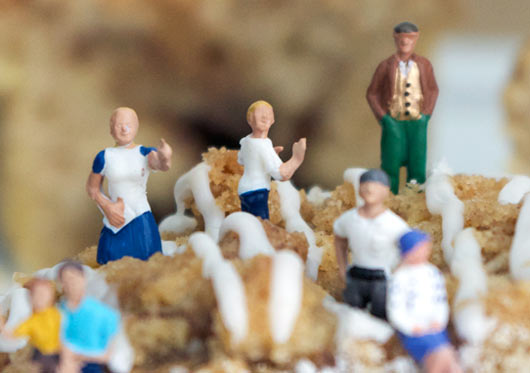 Optional Vanilla Glaze: Mix together 1 cup powdered sugar, 2 Tablespoons milk and 1/2 teaspoon vanilla. Stir until texture is smooth like a frosting. Add additional milk by the teaspoon until glaze is just liquid enough to drizzle. Drizzle over COOLED coffeecake if desired.

You can also use this recipe to make mini-coffeecakes in muffin tins or a mini-brownie mold. It makes 14. (I know... I wish it made an even dozen.) Watch the baking time. The mini-coffeecakes you see in the pictures took about 40 minutes to bake.

It's very important that you don't overfill baking pans or muffin tins when making this recipe. Fill them no more 3/4 full. The coffeecake rises a significant amount. 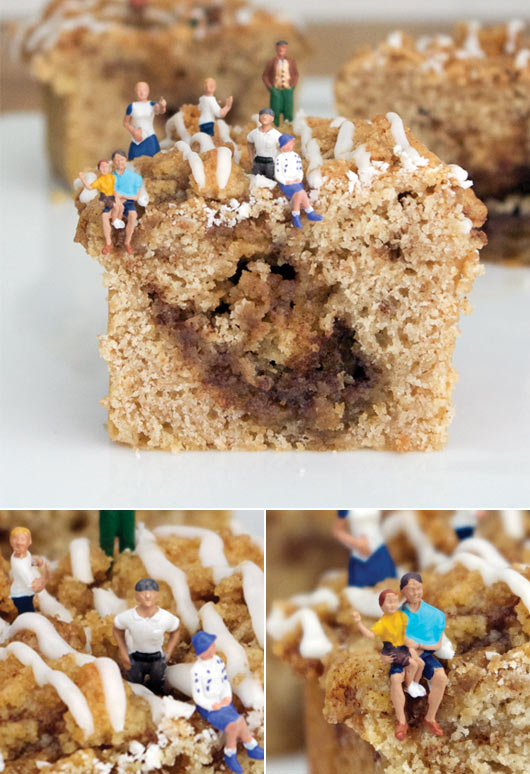 Similar to Starbucks' Classic Coffee Cake with a sweet cinnamon filling and a brown sugar and cinnamon crumble topping.


Comments About This Recipe
What do you think of Starbucks-Style Cinnamon Coffeecake?
There are no comments yet for this recipe. Be the first! Was it good? Was it bad? Did you make it better somehow? Let the world know!