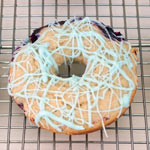 (12 servings)    Printable Version
These donuts were surprisingly light and tender. They were quick to make too... less than 30 minutes from start to finish, not including clean up. I'd recommend using small blueberries for this one. I used big, plump ones and the donuts threatened to break apart where berries were grouped together. "Don't threaten me, tasty donuts!" I proclaimed. Once I put some icing on them, they held together just fine. But still, smaller blueberries would have worked better. Check out a couple more cooking notes below. (This recipe was tested and photographed in January 2014.) 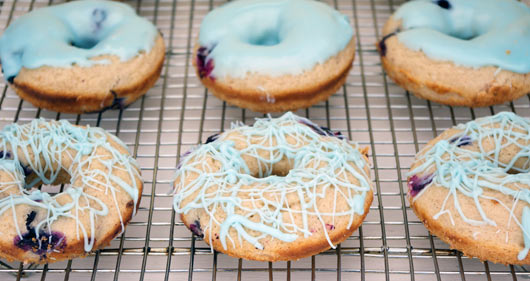 In a large bowl, sift the flour. Add the sugar, baking powder, salt, cinnamon and nutmeg and mix well.

Add the wet ingredients to the dry ingredients and stir until just combined and moistened. Gently, fold in the blueberries.

Fill each of the donut molds about 2/3 full.

Bake for 8 to 10 minutes or until lightly browned. They're done when you touch a donut gently with your finger tip and it springs back.

Allow donuts to cool completely before before icing. 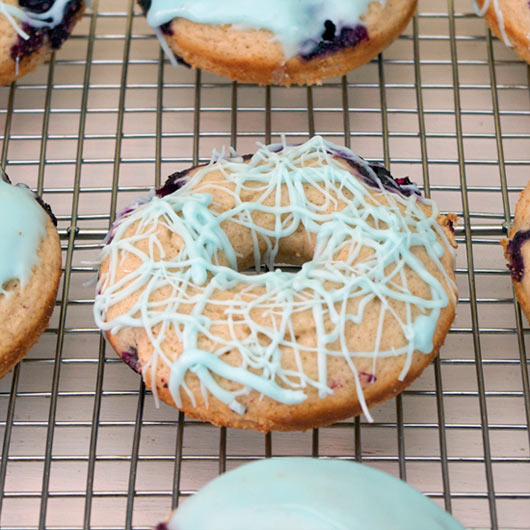 I topped my blueberry donuts with a simple vanilla icing. I mixed 1 cup of powdered sugar with 2 and 1/2 Tablespoons of milk and 1 teaspoon of vanilla. I also added a drop of blue food coloring to drive the whole BLUEberry thing home.

The batch of donuts you see here took exactly 9 minutes to bake.

Since these donuts are more tender than fried donuts, I found it far easier to drizzle icing over them as opposed to dipping the donuts in the icing. If I dipped them, everything worked fine. But there was always that haunting feeling that the donuts would collapse in my hand. Why risk it, right?

To fill the donut molds with batter, I like to fill a pipping bag with batter and snip off the end so the hole is about the size where you could slip your index finger through. Then just squeeze the batter into the molds.

Easy and fast baked donuts with fresh blueberries in a batter laced with cinnamon, nutmeg and vanilla. Requires a donut baking pan.


Comments About This Recipe
What do you think of Baked Blueberry Cake Donuts?
Overall Average Rating = 5 (out of 5)
Based on 2 votes.

From bea
This is definitely a charming take on baked donuts. Icing isn't really needed imo, but depends on how sweet you like things.

From DasUsaFan (Team Breakfast Member)
Very good, but definitely needed the icing to make them sweet like regular donuts.