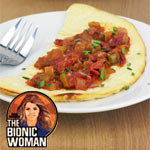 (4 servings)    Printable Version
When it comes to eating healthy, advice from chefs and nutritionists is fine. I like to turn to a higher power. I'm talking, of coarse, about The Bionic Woman. I was lucky enough to find a vintage cookbook in a thrift shop by Lindsay Wagner, the actress who played The Bionic Woman on TV from 1976 through 1978. The vegetarian cookbook is called The High Road To Health and it's filled with tons of great ideas to transform everyday dishes into vegetarian dish. The breakfast section isn't very extensive but it does have my favorite idea in the book. Today, I set out to make a famous Mexican egg dish without any eggs. It was delicious! It won't fool anybody, but it will satisfy almost anyone's craving for eggs. Please read more about the book following the recipe. (Recipe Tested by Mr Breakfast in October 2013.) 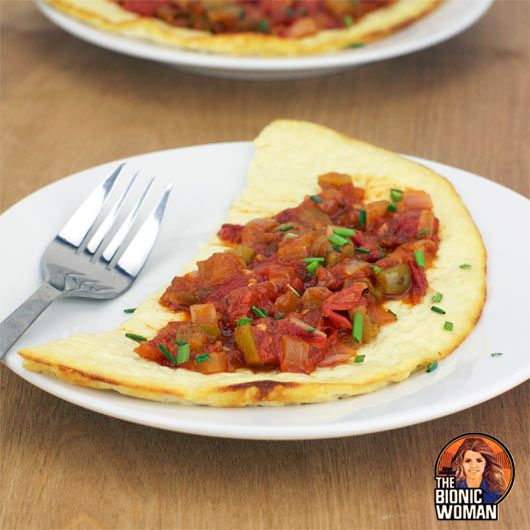 How To Make Huevos-Less (aka Egg-Free) Rancheros

To make the Omelet:

Drain and crumble the tofu. Place the tofu, soy milk, 1/4 teaspoon salt in a bender and pulse until smooth. Stir in the green onions.

Lightly oil two 9-inch pie pans (preferably glass). Divide the omelet mixture between the pans, smooth out the top with a spatula and bake (at 400 degrees) for about 35 minutes. The edges will become brown, the top will become golden and the tofu will have the texture of an omelet. When the omelets are cooked, loosen them from the pie pans with a sharp spatula and cut them in half.

To make the Rancheros Sauce:

As the omelets are baking, heat the vegetable oil in a large skillet. Add all sauce ingredients and cook, covered, over medium heat for 5 minutes. Uncover and cook another 5 minutes. (Let this simmer on low until omelets are ready.)

Place each of the 4 omelet portions on individual plates and cover with the Rancheros Sauce. 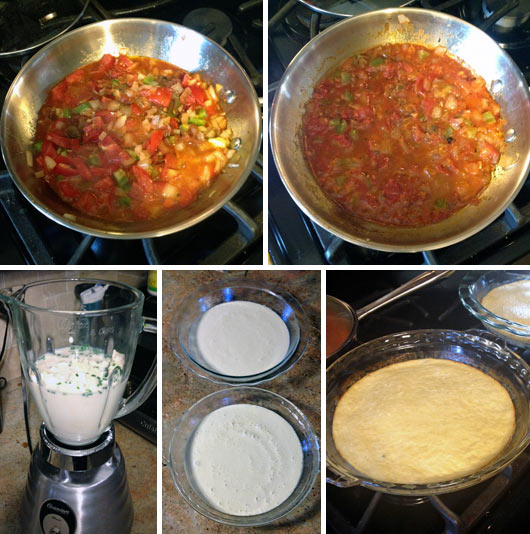 This recipe is from the 1990 Book The High Road To Health: A Vegetarian Cookbook by Lindsay Wager and Ariane Spade (Simon & Schuster). It's currently out of print, but you can often find used copies on eBay and Amazon. According to the book (on the the subject of vegetarian omelets): "An eggless omelet? That's just what this is. We think it's a rather unique idea and we'll bet that no one who eats it will guess it's not made of eggs unless you tell them." 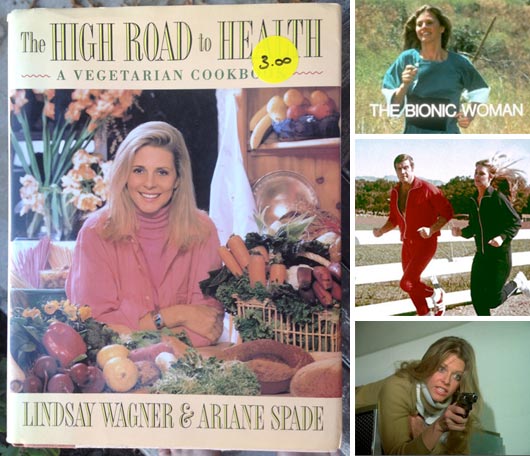 A vegetarian, egg-free omelet from TV's The Bionic Woman. Tested by Mr Breakfast.


Comments About This Recipe
What do you think of Huevos-Less Rancheros?
Overall Average Rating = 5 (out of 5)
Based on 1 vote.

From Ginna
I don't know who she is, but this is exactly what I was looking for. I wish it folded over better (like a real omelet) - it broke a little at the seam when I tried, but it did look like and taste a lot like eggs. Thanks!