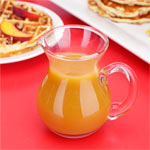 (6 servings)    Printable Version
If you love peaches and you love breakfast, you're about to make a new friend. This syrup is easy to make and goes with almost everything. I've tried it on waffles and pancakes, stirred into oatmeal and as a topping for a fruit and yogurt parfait. During the late summer months when peaches are cheap and plentiful, give your maple syrup a week off and try something new. (Tested and Photographed in August 2013.) 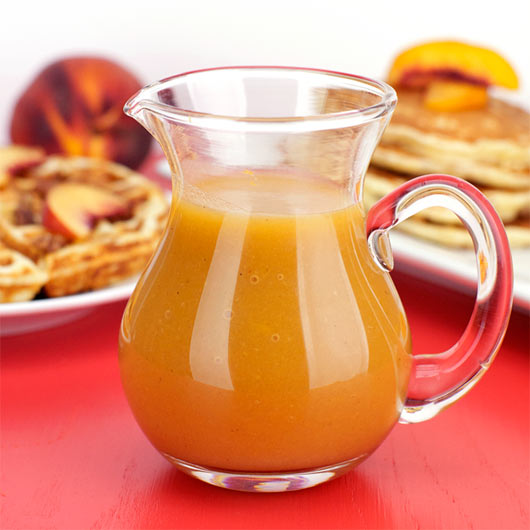 How To Make Peach Pancake Syrup

Peel the peaches. The best way to do this is to submerge them in boiling water for 30 seconds. The skin will become loose and easy to peel.

Slice the peaches in half and remove the pits. At this point, you can either blend the peach halves down to a puree in the blender or chop them into very small pieces.

In a sauce pan over medium-high heat, combine the peaches, sugar, allspice, butter and water (aka everything). Bring mixture to a boil and immediately reduce heat to medium-low. Stirring often, cook until the mixture thickens - about 8 minutes. 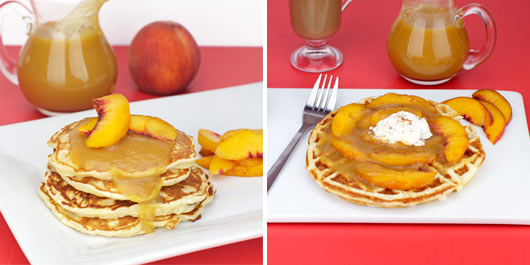 If desired, add 1 teaspoon of fresh lemon juice to the syrup. It isn't necessary, but it does tend to brighten the flavor of the peaches. The same can be said about smoothing out the flavor with a teaspoon of vanilla. For vanilla, stir it in after the syrup has thickened to get the most flavor out of it.

To make a Peach Maple Syrup, replace the sugar with the same amount of pure maple syrup.

To make a Peach Nectarine Syrup, just replace one of the peaches with a nectarine. I'd say do half nectarines, but they can be a little too tart sometimes.

A great treat for the late summer months when peaches are plentiful and inexpensive. Try it on pancakes, waffles or French toast. Also good swirled into oatmeal.


Comments About This Recipe
What do you think of Peach Pancake Syrup?
Overall Average Rating = 5 (out of 5)
Based on 1 vote.

Do you store it in the fridge or pantry? How long does it keep? Can you freeze it?

I think it would be great over Chicken, Sauteed Bell Peppers, Onions and Garlic with the Peach Glaze. Awesome. Make a marinade with Gluten Free Soy Sauce and add some Sesame Seeds, wow it's a Peach Teriyaki.

From Wendy K.
Love it, but I made too much. Wondering it there's lunch and dinner things I could do with it. I like peaches and salad. Could it be salad dressing if I mixed it with something? I was even wondering it would work as a marinade for chicken. Weird? I just really like it and don't want the extra to go to waste. Suggestions?