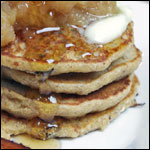 (4 servings)    Printable Version
Tear the bread into small pieces and soak them in the cider or water until very soft (about 10 minutes). Drain well, pressing out as much liquid as possible.

Beat the egg yolks, sugar and cinnamon until thick, then mix in the bread, currants (or raisins), almond meal and flour until smooth.

Beat the egg whites until stiff peak form. Fold the beaten whites into the batter.

Melt the butter in a skillet; drop the batter into it in heaping Tablespoon amounts. Fry until browned on both sides. Serve with fruit compote or apple sauce. 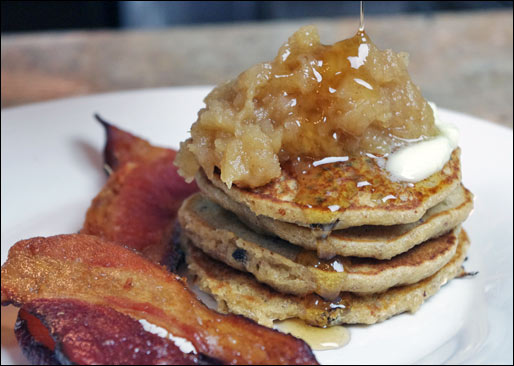 Important Note About This Recipe:

These pancakes may seem difficult to flip. They're very tender in the middle. If you're finding them impossible to flip on the first batch, mix another Tablespoon of flour into the batter before you make the second batch.

An unusual pancake recipe that uses soaked bread slices as a base for the batter. The addition of currants (or raisins) and almonds makes them hearty and flavorful. They taste like bread pudding!


Comments About This Recipe
What do you think of Austrian Bread Pancakes?
There are no comments yet for this recipe. Be the first! Was it good? Was it bad? Did you make it better somehow? Let the world know!