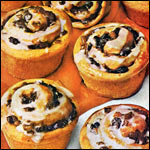 (24 servings)    Printable Version
Scald milk; stir in sugar, salt and margarine. Cool to lukewarm. Dissolve Fleischmann's Yeast in warm water in large bowl. Stir in lukewarm milk mixture, egg and half the flour; beat until smooth. Stir in rest of flour to make stiff batter. Cover tightly with aluminum foil. Refrigerate at least 2 hours. (It may be refrigerated up to 3 days.)

Divide dough in half. On floured board, roll one half into 18" x 9" rectangle. Spread with half the Mince Meat filling. From 18" side, roll up as for jelly roll. Seal edges. Cut into 1 and 1/2 inch slices. Place in greased muffin cups, cut side up. Repeat with rest of dough and filling. Cover; let rise in warm draft-free place until doubled, about 1 hour.

Bake at 350 degrees F. for 20 to 25 minutes, or until done. Frost with confectioners' sugar icing while warm. Makes 24 beautiful buns.

From a vintage advertisement for Fleischmann's Active Dry Yeast and Borden's None Such Mince Meat. "Tender golden yeast dough meets up with tantalizing mincemeat (brimming with fruit and spices)... and you've got buns that'll make 'em eat up and take notice! You add the fruit and spices with Borden's None Such Mince Meat. You bake them high and good and golden with Fleischmann's high rising Yeast. Give it a whirl!" For those unfamiliar, mince meat is a mixture of chopped fruits and spices, and sometimes brandy or other spirits.

The best thing that's happened to mince meat since pie! From a classic ad for Fleischmann's Yeast and Borden's None Such Mince Meat.


Comments About This Recipe
What do you think of Mince Meat Swirlybuns?
There are no comments yet for this recipe. Be the first! Was it good? Was it bad? Did you make it better somehow? Let the world know!