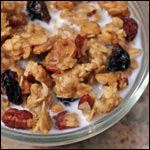 In a large bowl, mix together the oats, flour, brown sugar, salt and pecans.

In a microwave safe bowl, melt the butter. Stir in the maple syrup and vanilla.

Add the butter mixture to the dry ingredients. Stir to combine.

Spread mixture out over a lightly greased baking sheet.

Remove from oven. Allow granola to cool completely before serving or storing.

Stores well for a week in an airtight container.

The granola may appear overly moist and soft when it's removed from the oven. This is normal. It will crisp up as it cools.

This tasty granola is great as a cereal with milk or as a dry snack. Unlike other granola recipes, the oats clump together to form delicious crunchy clusters.


Comments About This Recipe
What do you think of Maple Pecan Granola Clusters?
Overall Average Rating = 5 (out of 5)
Based on 12 votes.

From Flapjack
Agreed with other reviewers... to halve the sweetener and butter. I also halved the salt and increased the baking time. Thanks for the recipe!

From Passing By
Too much sweetener in this recipe. You could cut the brown sugar and syrup in half and it would still be plenty sweet. Of course, once you cut back the sweetener, you will need to cut back some on the fat as well. Remember, if you are going to eat this with milk or a sweetened yogurt, you will be adding even more sugar to your meal.

From BB-3
Best tasting granola I have ever tasted! I have been making this recipe for two years now. As time has gone on, it has morphed a little, and I now use half the butter to make it a little lighter, then bake it an extra 8-10 minutes to give it the crunch I lost with less fat. Also really good with slightly crunched banana chips instead of raisins.

From idahomomof2
Used coconut oil instead of butter and almond meal instead of flour with gluten free oats. Delicious!

From Vickster87
Wow! I've tried other granola recipes and this is definitely the best! I think it's the brown sugar that puts it over the top. I baked it about 10 min longer because it seemed under baked. Thank you!

From cvm71 (Team Breakfast Member)
Finally, a granola recipe that works and really clumps. This is awesome.

From TexasJen (Team Breakfast Member)
Best granola recipe I've found so far! Wish I would have found it first after wasting my time and ingredients with two others (not on your site) that didn't make clusters when it said they would. Yours is the best one by far!

From Ms. Mom
We have made this twice now. Yummy! The second time we cut the brown sugar in half and used wheat flour. Still plenty sweet and delicious! Thanks for sharing this recipe! By the way, my 10 year old son made it all by himself the 2nd time. Its easy:)

From beastie
Thank you! I was looking for a recipe for just clusters so I could add them to store-bought cereals. I made it without the raisins and all week long I've been adding homemade clusters to Cheerios. I recommend it!

From brekkiebaby (Team Breakfast Member)
Omg. This could be my favorite snack ever!

From Dunwoody
Better than anything from the store and pretty easy. It makes actual clusters. That's the best part. I tried 3 different recipes and this was the best one. 5 out 5 from me. - Diane in Dunwoody, GA

From love2bake (Team Breakfast Member)
Awesome flavor! Mine needed to bake longer and it was a little sweet for me, but that's easy to fix!