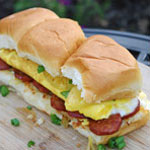 (1 serving)    Printable Version
This recipe was inspired by a recent trip to Los Angeles' famous Buttermilk Truck - a roaming breakfast diner that pops up in different locations around town. Find out more about the truck and their version of these sliders after the recipe.

Split the three rolls (treating them like a single roll) and butter both sides. Set aside.

Beat the eggs with the milk and salt and pepper to taste. Set aside.

In a small frying pan over medium heat, saute the onions in a drizzle of olive oil - stirring occasionally. When the onions are slightly brown and tender, transfer them to a small bowl and set aside. Leave the empty pan on the the stove (to make the eggs).

Place a separate large frying pan or a skillet over medium heat, melt a teaspoon or two of butter. Tilt pan to cover surface . Place the pineapple pieces and sausage slices in the pan. Cook until the sausage is heated through and pineapple pieces are lightly browned on both side.

Push the pineapple and sausage to one side of the pan. Add the bread - butter side down and fry until browned. Also add the sauteed onions so they get warm again.

Set the small frying pan to medium high heat. Add the eggs. As the eggs set, lift the edges and tilt the pan so uncooked egg will flow beneath the omelet to cook. When almost completely set, sprinkle the cheese down the middle. Roll or tri-fold the omelet so it's the same width as the Hawaiian rolls.

To construct the sliders: Set out your rolls and place sauteed onion and sausage on the bottom. Top that with the omelet, the pineapple and a sprinkling of chopped green onion. Use a serrated knife to cut into three separate sliders. 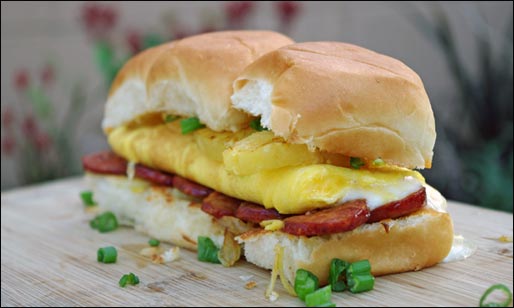 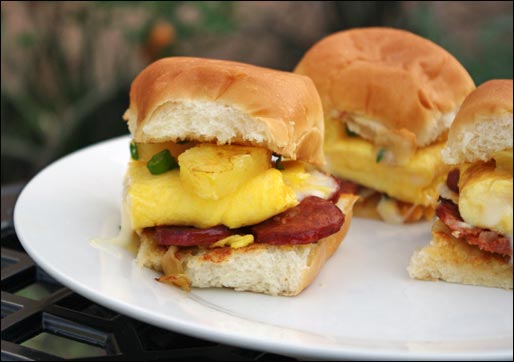 You'll notice in the images that I originally tried this with two pineapple rings, instead of one as listed in the ingredients. After making these a couple times, I found it worked better with less pineapple. A little bit adds a zesty punch. Too much overpowers the subtler flavor of the eggs.

If you don't have Portuguese sausage (also known as Linguica), just use sliced ham, pepperoni or salami. My decision to use Mozzarella cheese and pineapple was based, in part, on the concept of the Hawaiian pizza. If you've ever had one of those, you know that ham, pineapple and Mozzarella can be fine friends.

A word of warning... there's a lot of stuff in these little sandwiches. Have a napkin ready.

I loved this idea for breakfast sliders when I saw a version of it on the menu of the Buttermilk Truck. Their version is a little different. They add soy sauce to the eggs and omit the cheese and pineapple. I found that the soy sauce added a grey tint to the eggs and didn't add that much flavor, so I kept that out of my version.

If you ever find yourself in the vicinity of the Buttermilk Truck, definitely give it a try. Their Red Velvet Chocolate Chip Pancake Bites are out of this world. I have a version of Red Velvet Pancakes on the site, but their version is probably the best I've ever tasted. Check out buttermilktruck.com to see where they will turn up next.

Little breakfast sandwiches with eggs, cheese, sauteed onion, Portuguese sausage and pineapple. Wake up to a taste of the islands. Best served with tropical fruit as a side dish.


Comments About This Recipe
What do you think of Hawaiian Breakfast Sliders?
Overall Average Rating = 4 (out of 5)
Based on 1 vote.

This with Spam would be delish.

From Huey W.
I made it with three sausage patties. I skipped the pineapple and used Cheddar cheese. The only change I might make is using a sauce of some kind next time... maybe an herbed butter. It was very good, just missing that certain something to make it perfect. Wish I could explain better. Anyway... fun idea. Thanks!

We make something similar to this after Christmas. We usually have leftover dinner rolls so we make egg sandwiches with ham and then we have leftover stuffing as a side dish. Writing this is making me hungry.