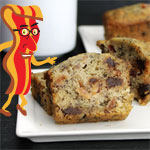 (10 servings)    Printable Version
What's better than than banana bread with chocolate? Answer: Banana bread with chocolate and BACON! The key to making this recipe work is starting off with very crisp bacon. I made my bacon in the oven at 425 for about 12 minutes. Then I pulled it out, drained and patted off the grease and baked it again for another 5 minutes for ultimate crispness. The bacon won't stay crisp in the bread, but the added cooking time keeps it from being chewy. This recipe is a success because it starts with a great banana bread base. You could omit the bacon and it would still be an awesome recipe. I had 5 people taste test this bread and everyone loved it. (This recipe was submitted in 2011. It was tested, photographed and illustrated in May 2015.) 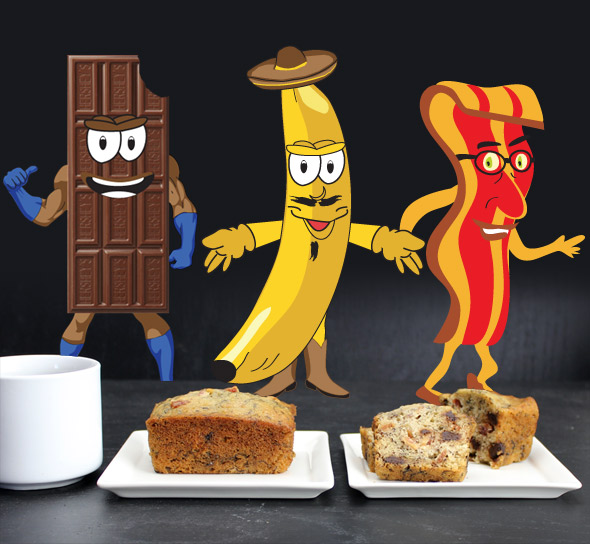 Chop bacon into half inch pieces and fry slowly over medium-heat in a non-stick pan, rendering out all of the fat. Once crispy, transfer to stacked paper towels to drain off excess grease and set aside.

In a large bowl, cream sugar and butter together until light and fluffy.

Once all the wet ingredients are mixed, add in the flour and baking soda. Stir in the bacon and chocolate once the batter is fully combined.

Pour the batter into a greased bread pan and bake in the oven for 55 to 60 minutes. Insert a knife into the middle of the loaf. If it comes out clean (no batter), it's done. Let the bread cool for 15 minutes before serving! 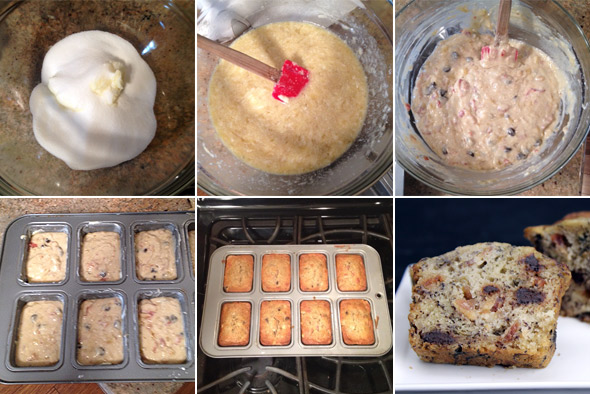 For our taste test, I made eight approx. 2x4-inch mini-loaves using the same amount of batter and following all directions. The mini-loaves were finished cooking in 30 minutes. 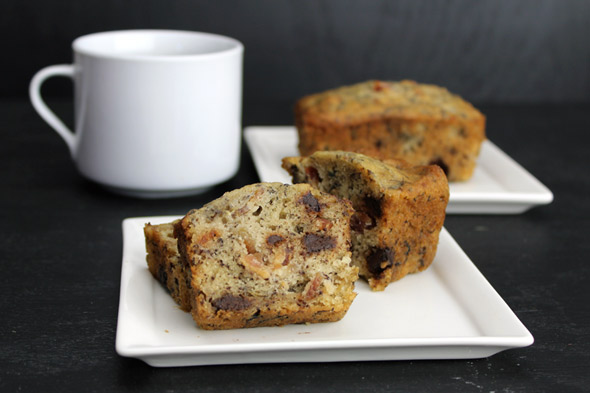 The banana bread for bacon lovers. The bacon bread for chocolate lovers. You could also make muffins with this recipe. Just bake in greased muffin cups instead of a loaf pan.

Mr Breakfast would like to thank missbreakfast for this recipe.


Comments About This Recipe
What do you think of Chocolate Chip Bacon Banana Bread?
Overall Average Rating = 5 (out of 5)
Based on 4 votes.

From V.R.Y. Happy
Loved it. It could use even more bacon. Next time, I'm gonna squeeze in a dozen slices.

Excited to try this. Just googled to see if there was such a thing as bacon banana bread and to my delight, it was even better with the addition of chocolate. Will let you know how it turns out. Thanks!

From Better w/ Bacon
This is hands down the BEST banana bread recipe I've made!

From I. M. Val
I used gluten free flour and coconut sugar instead of regular sugar... was awesome! My son loves bacon. I made this for his school class field trip as a great tasty treat!

From Silas
Very cool recipe. Perfect or me because I love peanut butter and sliced banana sandwiches. Some people think that's weird, but love it once they try it. Tip: Chop the bacon into very, very small pieces. This is good bread, but it's not as good when you get a bite where the bacon is chewy.