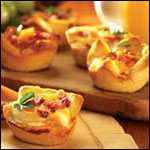 SPRAY 6 muffin cups and both sides of trimmed bread slices lightly with no-stick cooking spray. Press one slice into each cup so that corners are over edges of cup. Bake 5 to 6 minutes, or until lightly toasted. Remove from oven.

BREAK one egg into each cup. Season with salt and pepper. Sprinkle eggs with chopped sausages and cheese. Bake 15 to 20 minutes, or until eggs are set. Garnish with chives; serve.

Your partner will love it for sure! ;) Bread formed to muffin cups and toasted in the oven hold baked eggs, cheese and sausage. Easy to make and ready in less than 30 minutes.

Mr Breakfast would like to thank kaysera for this recipe.


Comments About This Recipe
What do you think of Baked Eggs and Sausages in Toast Cups?
Overall Average Rating = 5 (out of 5)
Based on 4 votes.

From courtney b.
Made this for my family and friends and they just raved over it! Their only complaint was this it was so good I didn't make enough! Thanks :)

From Kermit614
This is a great recipe. I put bacon, sausage, cheese, ham, onion and green pepper. They are great!

From try bacon
Hi - just an idea, I put bacon in mine and it was deelishhh You should try it, thanks for the recipe!! xxxxx

From MuffinStuffer
Mine didn't look as pretty as the picture, but they tastes AWESOME - good recipe. Thanks.