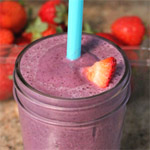 (4 servings)    Printable Version
This recipe was submitted to the site by a 12 year old kid with a sweet tooth. As someone said in the comments, "Ice cream for breakfast???" - to which I say, "Why not?" If you have a blender full of fruit, you're already off to pretty smart breakfast. If you sneak a little ice cream in the mix, it doesn't negate the benefits you'll get from the fruit. Just be cool. For this recipe, the amount of both ice and ice cream is a bit much. Reduce each of those to 1/2 cup and you still get plenty of sweetness and iciness. Generally speaking, ripe fruits alone provide enough sweetness for most smoothies. But if you find your creation isn't sweet enough, I promise I won't tell anyone if you slip in some of the good stuff. (This recipe was submitted in 2010. It was tested and photographed in September 2015.) 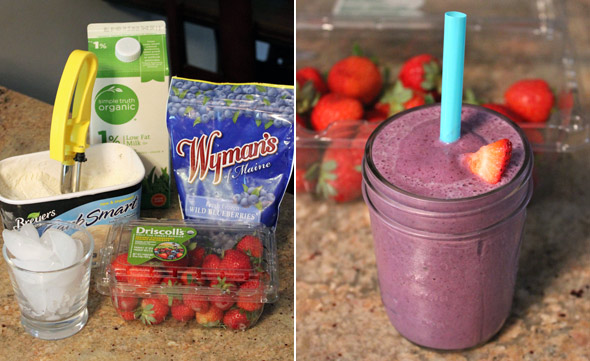 How To Make Breakfast Smoothie Delights

Place all ingredients into a blender and blend until nice and smooth. Enjoy your smoothie!

You can double the ingredients and make as many servings as you like. Fresh berries work best and you can use any kind of berries you like.

Mr Breakfast would like to thank beatlesluver for this recipe.


Comments About This Recipe
What do you think of Breakfast Smoothie Delight?
From yogurt instead

Ice cream for breakfast??? That sounds SOOOO wrong on many levels. I would think some plain Greek yogurt would be better!!!

Good stuff, but more of a dessert isn't it. I like to replace the blueberries pineapple chunks. Maybe with yogurt instead of ice cream then this would be good for breakfast. BTW... 2 cups of ice is too much... more like 1/2 cup.