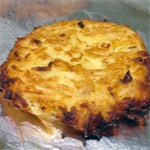 Using a food processor, grate potatoes and onion into a large mixing bowl.

Squeeze the mixture tightly between your hands over a bowl or the sink to release excess water. Return the potatoes and onion to the mixing bowl.

Add the flour, beaten egg and seasonings to the potatoes and onions. Mix well.

In a large skillet over medium heat, heat the oil. The oil is hot enough when a single strand of potato sizzles when dropped in the pan.

Dollop the mixture into the pan in 2 Tablespoons portions per latke. Flatten each latke lightly with a spatula or fork.

Cook each latke until browned on the bottom (about 4 minutes). Flip and cook the other side to golden brown (about 2 more minutes).

Serve warm topped with a small dollop of sour cream and apple sauce.

These latkes can be refrigerated and served later. Just reheat completed latkes on a baking sheet in an oven set to 350 degrees for 5 minutes.

Mr Breakfast would like to thank Jello for this recipe.


Comments About This Recipe
What do you think of Potato Latkes?
From Lachie

Sounds awesome. Fried potato and onions - one of the best things ever. Will make it after my night shift.