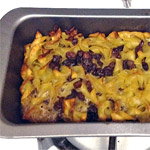 (10 servings)    Printable Version
Cook the noodles according to the package directions. Once tender, run cool water through the noodles in a strainer to remove extra starch. Drain and transfer to a large bowl.

Add the eggs and sugar to the noodles. Mix gently but mix well. Add the cottage cheese, sour cream and fruit cocktail (including about 1/2 of the syrup in the can). Mix well.

Transfer mixture to a large greased lasagna pan (about 9 x 13). Sprinkle the top evenly with cinnamon and sugar. If desired, scatter a handful of raisins over the top.

Bake at 350 degrees for 50 to 60 minutes or until completely set. Cover the kugel with foil halfway through the cooking time so the top doesn't over crisp.

You can modify this recipe by using other canned fruits. Try adding a big handful of raisins too.

Mr Breakfast would like to thank BobbyJ for this recipe.


Comments About This Recipe
What do you think of Fruit Cocktail Kugel?
Overall Average Rating = 5 (out of 5)
Based on 2 votes.

From Team Dragon
This is the exact recipe my mother and I used to make years ago. It was lost in one of my many moves. Can't wait to try it.

From RAZZ
I've made this twice, first with medium noodles, and second with large noodles. I prefer the large noodles, I happen to like raisins so the second time I added a lot of raisins, both yellow and brown, also added more sugar. The first time was not sweet enough for my family's taste. The consistency was great. Don't forget to cover for the second half of cooking time. All in all, this is a GREAT recipe, as good as I pay for in the Kosher deli at 13.99 a pound.