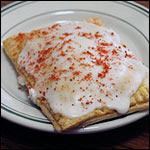 (8 servings)    Printable Version
These pastries are meant to be oven baked and eaten like a cookie - not toasted in the toaster (at least I've been afraid to toast them for fear that my icing will drip off in the toaster).

In a large bowl, combine the flour and salt. Cut in the butter and shortening with a fork until the mixture is like coarse sand. Add water one Tablespoon at a time - mixing after each spoonful until the dough can be formed into a ball.

Roll out the dough onto a lightly floured surface to about a 1/8-inch rectangle. Cut strips out of the dough about 2-inches by 3-inches.

Take half of the strips and spread 1 teaspoon of jam over their centers. Cover each strip with a corresponding non-jammed strip. Crimp the edges of each pastry.

Bake in preheated oven on parchment paper for 7 to 8 minutes.

As the the pastries bake, make the topping. Place the powdered sugar in a small bowl. Slowly stir and drizzle in milk until a thick, fluid consistency is reached. You probably won't need more than a Tablespoon of milk.

When done, remove the pastries from the oven and allow them to cool completely. Spread the glaze over the tops and sprinkle each pastry lightly with sugar sprinkles.

Note From Recipe Submitter: Hi Mr. Breakfast - I got this recipe from a wonderful website. Could you make this a link to it. She has beautiful pictures of the pop-tarts. The addition of vanilla and sugar to the crust was my idea. I hope you like them.

Use your favorite jam and make your own toaster pastries at home. It's easier than you'd think.

Mr Breakfast would like to thank lizabeth for this recipe.


Comments About This Recipe
What do you think of Homemade Pop-Tarts?
Overall Average Rating = 4 (out of 5)
Based on 4 votes.

From Foods Teacher
The recipe leaves out when to add the butter, vanilla, and sugar. I tried this with my foods classes and they did not turn out that great.

From Wyntersden (Team Breakfast Member)
This is a great recipe! I went to the website mentioned above as well. The shortening and butter are cut into the recipe at the same time, according to recipe on website. This was a great hit. I also made pumpkin poptarts using pumpkin butter.

From kelly H.
I liked making my own pop-tarts; however, the recipe called for butter, but it never said when to add the butter. Also, the dough was a little difficult to roll out.

From BeachBaby411
Very nice. And that girl's website is really fun.