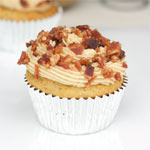 (6 servings)    Printable Version
I just tested this recipe and decided to take it a couple of steps further. Instead of the topping listed in the submitted recipe, I decided to top mine with maple buttercream frosting and crumbled candied bacon. Below the original recipe, I've included tips to make the muffins that way. I did try the recipe with the original topping. It was nice. But if you go all out with the crumbled bacon, it's more of an adventure. The only change I would make in the future would be to reduce the nutmeg to just a pinch. Other than that, these muffins reminded me of French toast and they were awesome. (This recipe was submitted in 2009. It was tested and photographed in January 2014.) 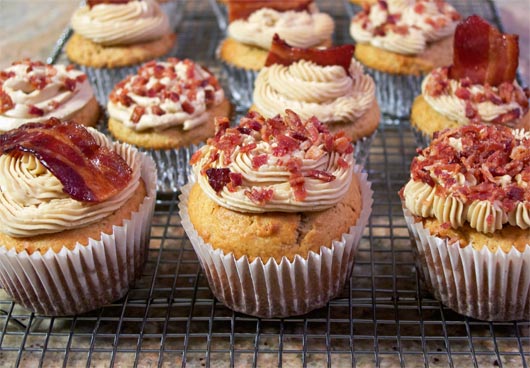 How To Make French Toast Muffins

In a separate medium bowl, beat the egg and egg yolk with the milk. Add the maple extract, vanilla and butter and mix well.

Add the wet ingredients to the dry ingredients and mix until just combined and moistened.

Dollop batter into muffin cups that are greased or lined with papers. Fill just slightly over half full. Depending on the size of you muffin tin, this recipe usually makes 6 to 9 muffins.

Remove muffins when lightly browned and a toothpick inserted into the center of one comes out dry (no batter).

As muffins cool, combine a teaspoon of sugar and 1/2 cup sugar in a bowl. In another bowl, mix 1/2 teaspoon of vanilla with 1/3 cup melted butter. Dip each muffin in the butter mixture and then roll in the cinnamon sugar mixture to make the topping. 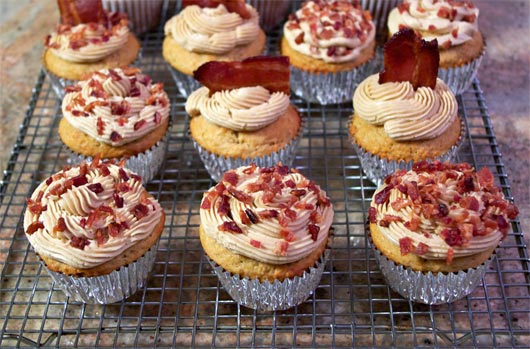 Make the recipe above - minus the topping - and allow the muffins to cool completely.

For the Maple Buttercream, use the filling recipe found here and double all ingredients. If you have it, replace the vanilla extract with maple extract. I've used this buttercream a few times now and I promise that it's a winner.

To make the Candied Bacon:

Preheat oven to 350 degrees. Spread cinnamon and sugar mixture out on a plate. Spread bacon slices out on a rimmed baking sheet so no pieces overlap.

Place bacon in oven and cook for only 4 minutes until bacon has started to release it's fat. Drain any fat from the baking sheet. Using tongs, dredge each piece of bacon through the brown sugar mixture and return to baking pan.

Bake for 15 minutes. Flip the pieces and cook for 7 to 10 more minutes until well-browned and cooked through.

Allow the bacon to cool and then chop or crumble the bacon into small pieces. (I used kitchen shears.)

Top each muffin with buttercream frosting and crumbled bacon. 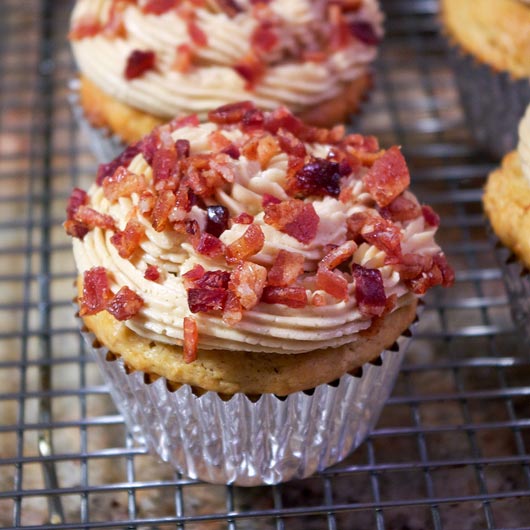 Side note:: Don't worry about covering each piece of bacon completely. The brown sugar spreads out as it heats up. Sometimes when I make bacon in the oven, I'll top the bacon with parchment and top that with other baking pan so the bacon will stay flat. Since I knew I was going to chop the bacon into bits, I skipped that step this time. 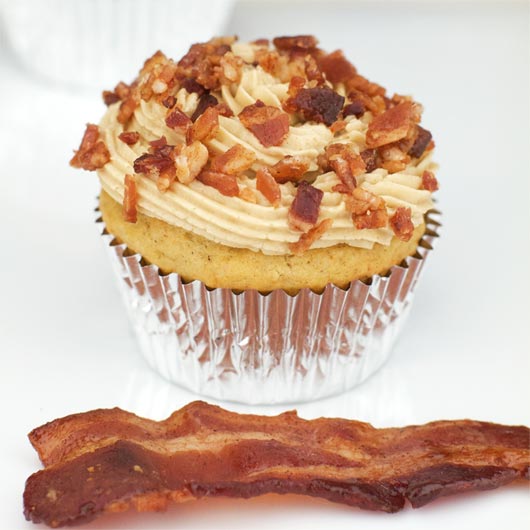 For a healthier muffins, you can use 1/2 whole wheat flour and 1/2 all-purpose flour. The muffins will be heavier, but still delicious.


Comments About This Recipe
What do you think of French Toast Muffins?
Overall Average Rating = 5 (out of 5)
Based on 4 votes.

From SarahP
Best muffins I've ever had.

From Kramin (Team Breakfast Member)
We use whole wheat flour and it is delicious!

From superlexii
I love these muffins!!