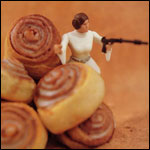 Put the 1 tablespoon butter in a small saucepan. Set the pan on the stove and switch on the heat to low. When the butter has melted, turn off the heat.

Lightly flour a work surface. Unroll the pizza dough on top of the flour. Using a pastry brush, brush the melted butter over the surface of the dough.

Put the granulated sugar and cinnamon in a small bowl. Stir with a small spoon until will mixed. Sprinkle the cinnamon-sugar mixture over the dough, leaving a 1/2-inch border on all sides.

Starting at the long side, roll up the dough into a log. Using your fingertips, pinch the seam together to seal.

Using a knife, cut the log crosswise into 1-inch-thick slices. Put the slices, cut side up, onto the greased baking sheet. 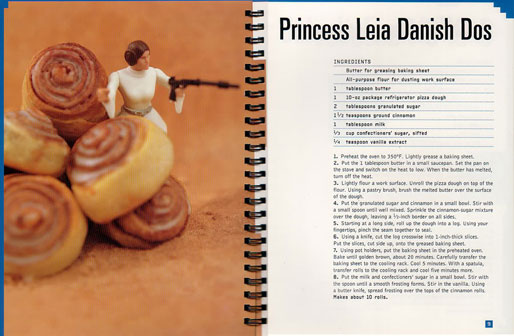 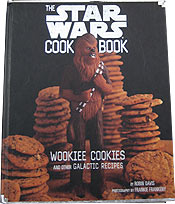 Put the milk and confectioners' sugar in a small bowl. Stir with the spoon until a smooth frosting forms. Stir in the vanilla. Using a butter knife, spread frosting over the tops of the cinnamon rolls.


This recipe comes from The Star Wars Cookbook: Wookie Cookies And Other Galactic Recipes. It's filled with fun Star Wars recipes for every meal, plus snacks and drinks. It appears to be out-of-print, but you can usually find used copies at Amazon.com if you click here.

This is a simple cinnamon roll recipe using store-bought pizza dough. It's especially fun because it has a Star Wars theme. When's the last time you had a Star Wars-themed breakfast?


Comments About This Recipe
What do you think of Princess Leia Danish Dos?
Overall Average Rating = 5 (out of 5)
Based on 4 votes.

From T. Hen
May the Force be with you!

From kate
I made the icing with blue food coloring and called it Bantha milk icing.

Hey how about a recipe for making the dough for the rolls. This recipe is lame.

From iPhoney
Wow what a blast from the past. This is great. I've made these sweet rolls before using the same method and it works really well. We were lame and called them "sweet rolls". The Star Wars name is more fun. Great site btw.