(1 serving)    Printable Version
This recipe was submitted to the site by a guy named Eric back in 2007. It took me a couple years, but I finally got around to trying it. Instead of a hamburger bun, I used a beautiful toasted pretzel roll. Rather than deli ham, I opted for Smoke 'n Honey Beef Roll (a sort of very smokey salami) from Seltzer's - which I warmed with the sliced roll in the toaster oven. For everything else, I stuck to the recipe. I liked it very much and I was able to make it in about 8 minutes. (This recipe was tested and photographed in February 2014.) 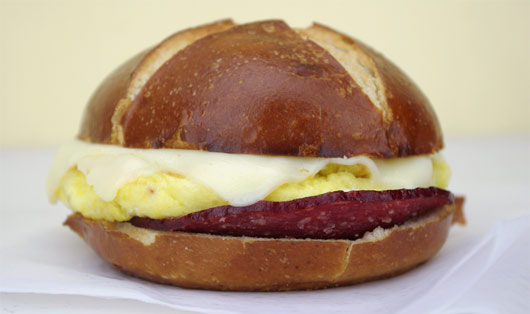 How To Make Eric's Breakfast Sandwich

Fry or scramble the egg to your liking.

Toast your bun or bread.

Assemble with slice of cheese.

I've been eating this for breakfast for a long time. It's a simple recipe that only takes about 10 minutes to prepare. Enjoy with a glass of cold milk or orange juice!

Mr Breakfast would like to thank Eric_R for this recipe.


Comments About This Recipe
What do you think of Eric's Breakfast Sandwich?
Overall Average Rating = 5 (out of 5)
Based on 1 vote.

From FastFreddy
I do the same thing but with Lawry's seasoning salt instead of the creole stuff. And forget about the deli sliced ham. Use a nice slab from a grilled ham steak and it's the best.