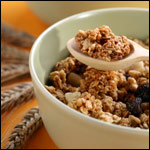 In a large bowl, toss oats with the almonds, coconut and sesame seeds.

In a small bowl, stir the the syrup, brown sugar, oil, cinnamon and salt together with the water until well blended.

Pour wet mixture over oat mixture and stir to combine.

Stirring occasionally, bake 1 hour and 15 minutes or until evenly browned.

Remove from oven and allow to cool. Mix in the raisins.

Great with milk for morning cereal. Stores well for two weeks in an airtight container. It takes less than 90 minutes to make the whole thing and then you have fresh homemade cereal for the week.

Mr Breakfast would like to thank sweettooth for this recipe.


Comments About This Recipe
What do you think of Almond Raisin Granola?
Overall Average Rating = 4 (out of 5)
Based on 4 votes.

FYI - You don't have to grease the pan. There's enough oil in the recipe that nothing sticks. It turned out really good. The only change I made was to use regular raisins instead of golden ones. Kids loved it too.

Love this recipe. Just what I was looking for.

From yogirlufine
So much better than store bought. I added a tablespoon of flax as well. Really good one. Thanks.

I like that it's cooked at a low temperature for longer which reduces the chance of burning. It's not healthy, but I don't see anything in the recipe that says it is. Lots of granola isn't healthy. If you want healthy, make muesli.

Way too sugary you could cut the sugar and syrup in half and it would still be really sweet.

From Roselaine
I've tried it and it's very nice.

Wow you call this healthy!!! It's a walking sugar factory... I would like to see the nutritional value of this recipe please!! sweetened coconut, raisins, maple syrup, brown sugar, are all sugars. Then the oil and salt... this is not a healthy recipe at ALL. Diabetics nor people with low blood sugars SHOULD NOT BE EATING THIS.

From Pet
My first granola too -- and it's very, very good!!

From Smiles8887
Very easy, very good. My first granola, but I really liked it! I love that it doesn't ask for butter-yuck!