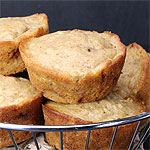 (12 servings)    Printable Version
These muffins are super basic, but I liked them a lot. They're really fast to prep (about 12 minutes) so they're cooked and ready in just over a half hour. The batter made exactly 12 muffins which is great. It can be frustrating when the batter isn't enough to fill the muffin tin or it's so much that you need another tin. This recipe differs from other banana muffins in that the bananas are chopped and not mashed. Since the ratio of banana to flour is very high, don't expect these muffins to rise very much. They're best when served warm with a pat of butter. They might look a little boring, but they taste really, really good. (This recipe was submitted in 2006. It was tested and photographed in July 2015.) 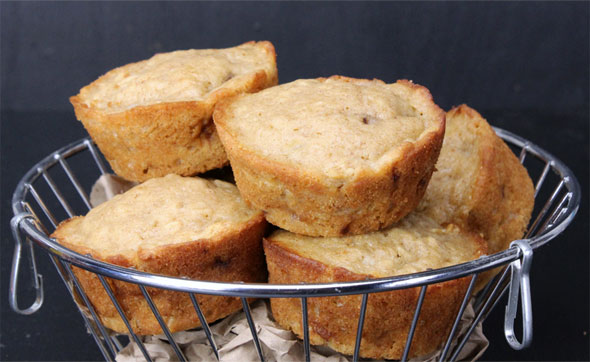 How To Make Banana Oatmeal Muffins

In a separate smaller bowl, cream butter and brown sugar together by hand until the texture is like wet-sand.

In a third bowl, beat the egg. Add milk and vanilla and mix well.

Combine all three mixtures in the largest bowl. Mix well. Stir in the banana pieces.

Spoon batter into prepared muffin cups, filling each about 2/3 full.

Bake for 25 minutes or until golden brown (start checking after 20 minutes). If a toothpick inserted into the center of a muffin comes out dry (no batter), the muffins are done. 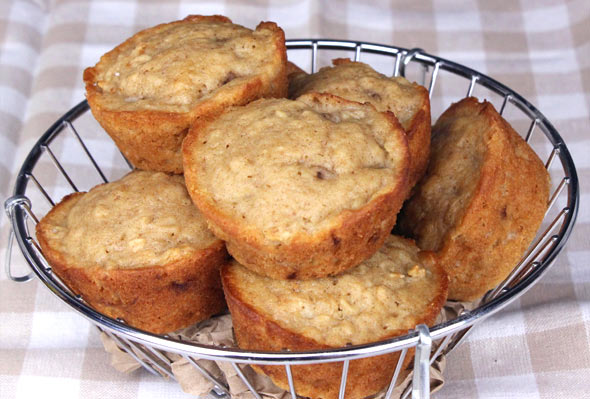 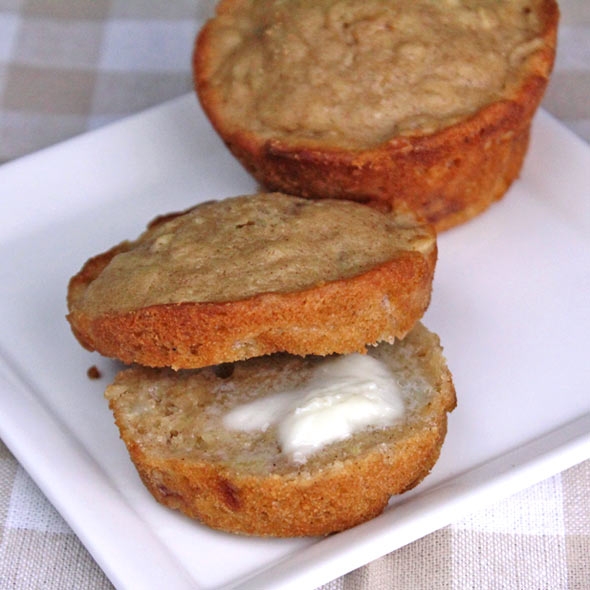 This is a great recipe to use up over-ripe bananas. You can use regular milk if you don't have buttermilk.


Comments About This Recipe
What do you think of Banana Oatmeal Muffins?
Overall Average Rating = 4 (out of 5)
Based on 8 votes.

From Mom of 3
I found this recipe in a quick internet search to surprise my kids this morning. They all 3 give it huge thumbs up! We like them 'as is' but I can see that raisins added in would be good, too.

From Teapots
I had some frozen bananas so I mashed them because defrosted they were too soft to cut. I also subbed nutmeg and cinnamon for the allspice, used white whole wheat flour instead of white flour, and used applesauce plus 1 T of butter for the butter, and cut back on the sugar. And I also used another suggestion and added raisins. These changes made for a healthier muffin, but also delicious!!

From kzapora (Team Breakfast Member)
The muffins were maybe a little too sweet could use 1/2 c. brown sugar. Also, the were flat instead of rounded tops due to the "mixing very well" so, less mixing would be better. Nice and moist though.

From azalia
Just tried making these. They are okay but I think it's due to the almost ripe bananas. Otherwise, I think it would be better. I think I'll add cinnamon powder instead and try mashed bananas although I do like the chuck ones as well.

From Virginia Mom
I substituted half of the flour for whole wheat flour, mixed in 2 tablespoons of ground flax seed, and stirred in a cup of currants. My kids loved them!

From camdensnana (Team Breakfast Member)
Wonderful! Loved them... baked at 375 as suggested they were done in 20 minutes! Love the chunks of banana! (rather than mashed bananas!)

From clarason
It makes edible muffins. Although I think they are too sweet, and the cooking time is too high. I would lower the sugar down by about 1/4 of a cup and lower the temp to 350 degrees F. I only had to cook mine at 375 for 20 min and the edges were a little too brown. I was using a no burn muffin tin if I hadn't they would have been burnt.