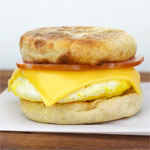 (1 serving)    Printable Version
This quick, microwave Egg McMuffin-style sandwich recipe was submitted to the site back in 2006. I've made it several times since then and can vouch for the results. The only change I make is that I like to use a small (3 and 1/2 inch diameter) bowl to make the egg patty. I microwave the (slightly beaten) egg for 30 seconds, give it a stir and then continue microwaving in 15 second intervals until the egg is completely set. This sandwich really is as easy as it looks. (Photographed July 2013) 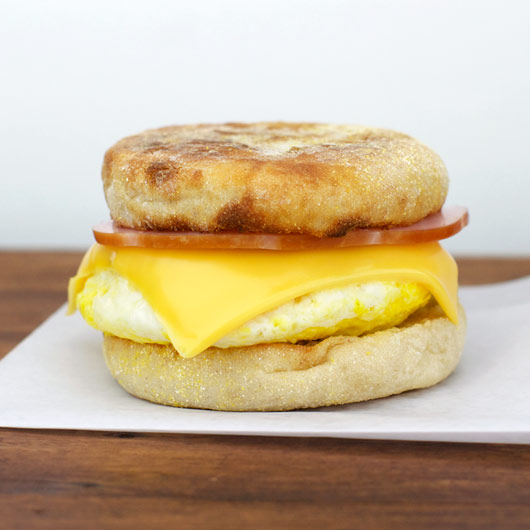 How To Make A Microwave Egg-A-Muffin

Place butter in a coffee cup and melt in the microwave. Swish the liquid butter around the cup a little. Now, crack the egg into the coffee cup; cover with a paper towel, and microwave for about 45-60 seconds.

After the egg is cooked, heat the English muffin with cheese and Canadian bacon on each slice for about 15 seconds. Run a knife around the edges of the egg and dump out onto English muffin; and create your egg-a-muffin sandwich.

This is my version of the breakfast sandwich from a certain fast food chain. Be careful heating the egg (they can explode if you're not careful).

Mr Breakfast would like to thank mitchellkc1 for this recipe.


Comments About This Recipe
What do you think of Microwave Egg-A-Muffin?
Overall Average Rating = 5 (out of 5)
Based on 8 votes.

From Double Up
I love it. I added ham and 2 pieces of cheese and it's amazing.

From Judy C.
Perfect! Easy and hit the spot this morning!

From naldrich
Worked first time! Thank you! I used a spray of olive oil in the mug and cracked the yolk before cooking.

From Evi
Hi! If you do the scrambled egg version, and add a little shredded cheese, the cheese will settle in the middle of the cooked egg, making it 'egg hot pocket like' (but much better because hot pockets are gross). It's delicious... and easier. I eat them with just egg and cheese, this way only has 2 steps-microwave, toast once, combine... yum!

From cookiemonster
I did what 'Leadfoot' suggested with a little water and a stir. Awesome!

If you put just a touch of water in there and mix the egg around, you can get a very fluffy scrambled steamed egg that's good. At the restaurant i worked at years ago we did these in small plastic cups like margarine size and they come out round and fluffy and fit perfectly on a bagel. they will bubble up and explode if they're in there too long so watch them and see what the right time is on your microwave. Mmmmm, so going to get English muffins today to make my own version too, they should sell them all day.

Just pierce the yolk with a toothpick before cooking.

From ajcarl (Team Breakfast Member)
If you just crack the egg yolk when you put this in the microwave, you won't ever have to worry about it exploding. I will post my own version soon. It's similar but I believe much simpler and better.