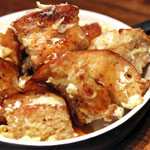 (4 servings)    Printable Version
Let's face it... When you fry bread in bacon grease or butter, you could top it with dirt and it would still taste great. I tried this as a sweet dish topped with maple syrup and as a savory dish topped with cheese. Both were outrageously good. The sweet version was narrowly the winner. While wildly flavorful and fun, this dish is a little weird. It's a mix between French toast and scrambled eggs. To the uniformed eye, it'll look look you messed up one of those recipes. But if you know what you're in for, this is a fantastic treat that's very easy to make. (This recipe was submitted in 2005. It was tested and photographed in November 2015.) 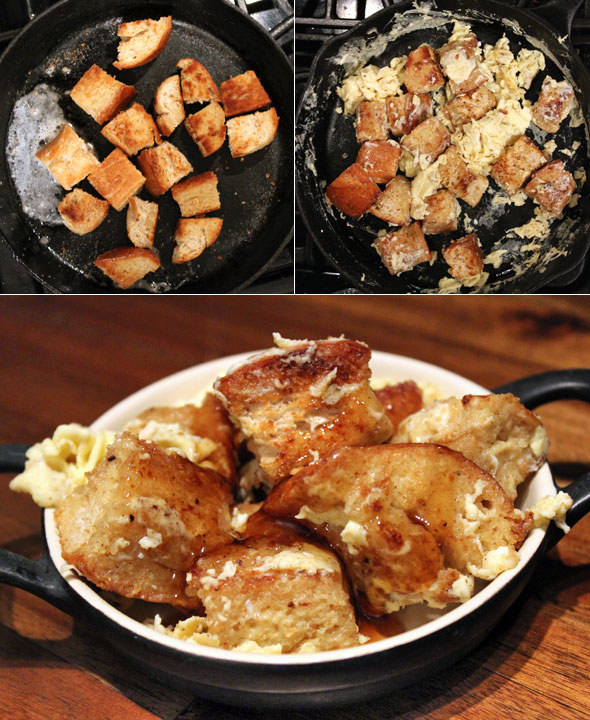 How To Make Camp Eggs 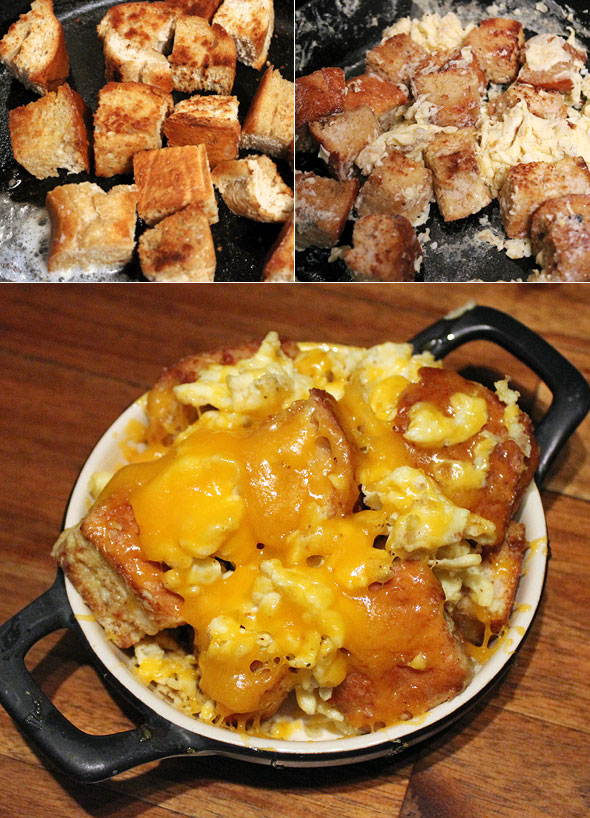 For my recipe test, I used butter. It required about 1/3 cup of butter to toast all sides of my bread cubes.

Since this recipe was submitted with the name Camp Eggs, I have to believe it is meant to be prepared in a skillet over a camp fire. I'd be really curious if anyone as tried that. I used a traditional stove.

This recipe got me jazzed up about possibly using butter-toasted bread cubes for other applications. They would be terrific as a base for nachos. I could even see them working treated like a cake topped with ice cream. If you have other ideas, let me know.

Our kids like to put syrup on this as a different French toast. My father and mother made this for us when we were children while camping. Daddy has since modified his recipe, now adding kippers, diced bell pepper, mushrooms, cheese, etc.

Mr Breakfast would like to thank Alloramadai for this recipe.


Comments About This Recipe
What do you think of Camp Eggs?
Overall Average Rating = 3 (out of 5)
Based on 3 votes.

Do I have to use bacon fat? I know it would add a lot of flavor, but I'm trying to avoid fatty foods. Please let me know if I could use olive oil or margarine.

From Kevin
Hi. First time I've made one of the recipes from this site. This was one of those strange recipes that I thought was much better as leftovers. The first morning it was kind of blah. I had the rest for two more breakfasts and it was pretty good - definitely reminiscent of French Toast. I made it exactly as written (with 6 slices and 10 eggs). It was also the first time I'd ever used bacon drippings (which I'd been saving in a container in the fridge). The flavor was kind of mild though, so I can see how adding, e.g., maple syrup, would really jazz it up.

From Debbie G (Team Breakfast Member)
I had it on camp and it was so good a really yummy.

From mtbike40 (Team Breakfast Member)
I loved the bread in the eggs. Instead of bacon drippings I used 1TBS of margarine.