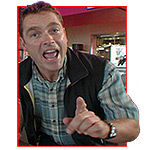 Toast coconut on parchment for about 6 minutes until lightly toasted. Allow coconut to cool to room temperature.

In a small sauce pan over low heat, stir butter and honey until butter is melted and well combined.

Add honey-butter and peanut butter to the oat mixture and stir until well combined.

Squeeze together a few chunks to create oat clusters.

Serve with milk and fresh fruit. Stores well in a sealed container for two weeks.

As seen on Mr Breakfast's appearance on the Food Network's "The Secret Life Of... Cereal".


Comments About This Recipe
What do you think of Jim's Super Granola?
Overall Average Rating = 5 (out of 5)
Based on 3 votes.

From donutguy (Team Breakfast Member)
This is a really good recipe. I personally love the popcorn in it. It makes me think puffed rice cereal would be a great addition too. Has anyone tried that?

From Riley
Great recipe... although I leave out the popcorn and wheat germ and add an extra 1/2 cup of oats. When are you going to be on the Foot Network again? I also miss the old host... the new host isn't nearly as nice. Thanks for the recipe.