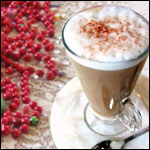 In a medium sauce pan, heat water to a low boil. Add sugar, cocoa, cinnamon and nutmeg. Bring back to a low boil for about a minute - stirring occasionally.

For the sugar, baker's sugar is the best to use because of its smaller, quicker to dissolve granules.

If you make too much, just jug it up and simmer in a saucepan to serve later. Merry Christmas!

A delightful holiday cocoa flavored coffee that falls somewhere between a regular cup of Joe and a fancy latte.

Mr Breakfast would like to thank casey for this recipe.


Comments About This Recipe
What do you think of Christmas Coffee?
Overall Average Rating = 5 (out of 5)
Based on 5 votes.

From yake
Love it!

From Stacey E.
I made it with a packet of hot cocoa mix, but still added a little sugar. It tastes much stronger if you let it sit overnight in the pot. It also needs to be strained, because you get a lot of grit and sludge otherwise. I just strained it every time I poured a cup.

From Patt
A little too sweet for me... cutting back on sugar next time.

From V. Close
Made this last year. Making again this week for early Christmas with friends. Love it. Recommend it.

From elambert
I began making this recipe several years ago. It was such a hit that it became a tradition among the females of my family whenever we were together for the holidays.

This is nice with Lavazza Blue Coffee.

Can you substitute Splenda for the sugar? This would reduced the carbs.

Instead of using unsweetened cocoa and adding sugar, can't you use regular cocoa (Nestle or something) and forget about the 1/2 cup sugar?