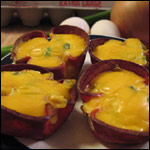 In a non-stick skillet or on a griddle set to medium heat, cook the 6 slices of the bologna until the centers puffs.

Place each of the heated bologna slices in its own muffin cup.

In a small bowl, beat the eggs with the milk and salt. Stir in the chopped bologna and onion. Pour egg mixture into bologna cups.

Bake uncovered at 350 degrees for 15 to 20 minutes until the eggs are set.

Layer thin strips of American cheese over the omelet cups and bake a few minutes longer until cheese melts.

This recipe has roughly 7 grams of carbs per serving.

A mix of egg, cheese and green onion encased in a cup made out of bologna. It's really quite good and that's no bologna.

Mr Breakfast would like to thank CurbingCarbs for this recipe.


Comments About This Recipe
What do you think of Bologna Omelet Cups?
Overall Average Rating = 4 (out of 5)
Based on 2 votes.

From Komposer (Team Breakfast Member)
I really liked this recipe! I actually put some sausage in my mixture to mix it up a little.

From curlysue9000
This is actually a really fun recipe and I use this all the time! It is very versatile with what you can add to it. Love it!