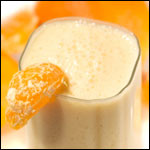 (2 servings)    Printable Version
Mix everything in a blender and enjoy.

They are so darn good!! (Note From Mr. Breakfast: Be sure to read user notes about salt and consider adjusting that ingredient.)

Mr Breakfast would like to thank joblow5$ for this recipe.


Comments About This Recipe
What do you think of Orange Julius?
Overall Average Rating = 4 (out of 5)
Based on 19 votes.

From Yankdownunder
I agree with CherokeeAngle13 that they used Malt Powder in it. First time I had one was in the early 70's. YUMM!!!

From xtiml (Team Breakfast Member)
The concern about raw eggs is unwarranted. If you have emphysema, I suggest you go on a diet of raw eggs and that is all, except pure water, for a week or two. Egg producers do not want to have their eggery come down or be contaminated with salmonella... just as getting sick from raw milk was over-exaggerated and caused everything to be pasteurized including your orange juice and other juices which destroys the best part of the nutrients in them. Pastuer was a charlatan.

From Orange Habit
It tastes better with egg. For me, it goes to the taster preference. Not everyone has the same taste or remembers how it used to taste but this is the best I ever tasted. I miss those hotdogs too!

From Matt
Bland. Omitted salt, still did not pop like a Julius should. Not recommended.

From riannotti (Team Breakfast Member)
I omitted the salt and replaced with sugar. I only used one egg. Delicious. Next time I will try 2 eggs. Stop worrying about the raw egg. You don't consume them every day, do you? And I bet you let your kids lick the brownie batter off the spoon... that's got raw eggs, doesn't it?

From Funkerman
The egg adds to the thickness. Delicious.

From dorita
Needs sugar, like the egg. It adds protein. Mmmmmmm

From MJ5
I skipped the egg and it was still delicious. Why would I need egg? What does it add?

From 3litlpgs
This is soooo good! I would say it is more than 2 servings though!

From blend everything
Okay so the salt is wrong and can be omitted completely, but other than that this is delicious and very close to the old original recipe. At least that's what I think.

Recipe says 21 servings?? I don't think so. Maybe 1-2 instead?? It makes me wonder if the submitter had a food service (i.e. LARGE) version of the recipe and didn't reduce the salt appropriately.

Note From Mr Breakfast:
Thanks MomUv5. I just changed the serving size to 2. I appreciate your note.

From Flash - Master Of The Universe
Really good. Pretty close to the real thing. I agree about the salt being too much. An entire teaspoon seems like way too much. I used just a couple dashes. Definitely reduce the salt. Otherwise, great.

OMG people. People have been eating raw eggs / soft cooked eggs for centuries WITHOUT refrigeration and MANY bodybuilders still do it every single day of their lives. The chance of getting sick by a raw egg is lower than winning the lottery. It is all about the lawsuits, period. I just tried another Orange Julius recipe and I knew something was missing..yup, the raw egg. Next time I will know better and will be using the raw eggs!

From jtaylor
You should use egg whites only not yolks to reduce chance of illness wash egges before cracking and make sure it is survered cold. and btw if u read the sing it says that products have eggs :)

I didn't know that you had to add raw eggs, you could get samonella poisoning, if thats what they use at Orange Julius they should really let you know!!!!!

From skip the egg

I would take out the eggs and vanilla and add in a few tablespoons of vanilla pudding powder. You'll get the thickness without the raw egg.

Well I have to tell you mom use to work at Orange Julius in Riverside, California and they used a malt mixed in with their freshly squeezed oranges and ice along with the egg whites. MMMMMMM good! Too bad they aren't made that way too. Not to Mention those Awesome Hot dogs they use to have.