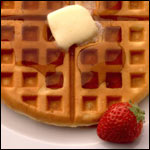 International Waffle Day (March 25) originated in Sweden where it is called Vĺffeldagen. It occurs nine months to the day before Christmas - the day the Archangel Gabriel told the Virgin Mary that she was pregnant. As the holiday progressed, it also began to commemorate the first day of spring. Waffles come into play because on March 25th the women of Sweden would set aside their winter tasks like chopping wood and knitting, and began their spring tasks... the most notable of which was preparing waffles.

National Waffle Day (August 24) is the anniversary of the first U.S. patent for a waffle iron. Cornelius Swarthout of Troy, New York received his patent for a "device to bake waffles" in 1869. His early waffle iron was used in conjunction with coal stoves, consisted of a griddle and a cover and required flipping of the device to cook both sides of the waffle. At present, National Waffle Day is at best a "bizarre" or "unique" holiday" - the fluff stuff of radio DJ commentary. Waffle promotions at some restaurant chains have helped to keep the holiday alive, if only barely.

The editorial content above may not be reproduced without the written permission of Please contact us for reprint requests.
Site Index/Glossary
A|B|C|D|E|F|G|H|I|J|K|L|M
N|O|P|Q|R|S|T|U|V|W|X|Y|Z
Related Terms:
Waffle
Pancake Day
Waffle Maker
Holiday Features