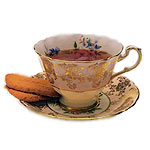 Super question. English Breakfast Tea has been marketed as a "Breakfast Tea" in England for over a century. It is a blend of several black teas derived from various locales including India, Sri Lanka, Kenya, Malawi and China.

English Breakfast Tea was actually invented in Edinburgh, Scotland. A tea master by the name of Drysdale came up with the idea of marketing his blend as "Breakfast Tea". The concept soon spread to England where tea had become enormously popular. Like today's fo'-shizzle-my-nizzle Caucasian teens who embrace rap culture, the English of the 19th Century were crazy for anything even remotely Chinese, where tea in it's most purest form originated.* Tea houses in London began adding "English" to the name, and the tea became and remains one of the most popular teas in England.

From a breakfast semantics perspective, the question we really need to ask is "why is there no "Breakfast Coffee" in popular nomenclature?" How is it that "Breakfast Tea" was able to separate from the pack of tea in general?

To answer that, we must look at traditional English meals of the late 1800's. The English basically had two meals a day: a breakfast consisting of beef, pork and bread (and often beer) and a huge potpourri dinner. The distinctly English tradition of afternoon tea became a nationwide phenomenon because it was basically a light lunch. The Duchess of Bedford is credited as being the first to serve finger-foods with tea at five o'clock. The late afternoon pick-me-up was quickly embraced by all of England and "afternoon tea" became a concept embedded into the nation's psyche.

With tea so associated with a particular time of day, it is easier to understand how the concept of a "morning tea" was able to prosper when "Breakfast Tea" arrived from Scotland some years later.

Had our colonial forefather had a tradition of afternoon coffee time, many of us may have had "Breakfast Coffee" this morning.

With the history lesson out of the way, we can get to the most important answer to "What is English Breakfast Tea?" It is a robust, full-bodied beverage with light floral undertones (sometimes referred to as "coppery"). When blended with milk, it produces a comforting aroma eerily similar to warm toast and honey. And as we know, the olfactory receptors in our noses are responsible for 80% of what we perceive as flavor.

Do yourself a favor and try English Breakfast tea instead of coffee one day this week. It has enough caffeine to provide your daily kick-start. Plus, it's one more chance to experience how diverse this amazing meal we call breakfast can be. (Notice how the taste of breakfast items you're used to change subtly depending on the beverages you have with them.)


*Legend has it that tea was discovered by Emperor/scientist Shen Nung in China 5,000 years ago. Before stumbling upon tea, Shen Nung was one of the first men to popularize water purification. His servants were ordered to boil all water before it was served. As the story goes, one day some leaves flew into Shen Nung's boiling water. The resulting brown liquid became known as tea.

More Answered Questions:
How do I make oatmeal in the microwave?
Why do we drink orange juice at breakfast?
How do I clean my waffle maker?
How do you boil an egg?
Is it possible to roast an egg?
What makes beef become corned beef?
What is buttermilk?
Can I use a crockpot to keep scrambled eggs warm before serving?
My 10-year-old son will not eat breakfast. What should I do?
Why are eggs associated with breakfast in so many countries?
Where does the word breakfast come from?
What is gruel and did orphans really eat it?
See All Breakfast Articles 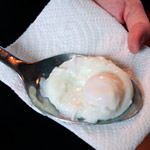 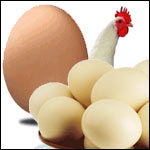 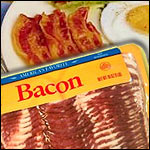 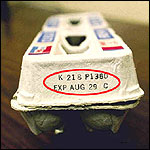