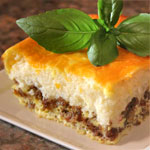 (10 servings)    Printable Version
Each piece of this casserole feels like a complete, hearty breakfast. You get cheesy grits in the top layer and sausage and egg at the bottom. The grits have a surprising light texture. When first prepared, the grits are quite heavy. They become light and souffle-like as soon as they're baked with the beaten egg. This dish definitely spotlights sausage. To make it Spicy with a capital "S", consider using all hot sausage instead of half being mild. When I make this again, I'll probably mix a half cup of sauteed onions and peppers in with the grits to give it a slightly more complex flavor. But as is, this breakfast is satisfying and tasty. (This recipe was submitted in 2003. It was tested and photographed in October 2015.) 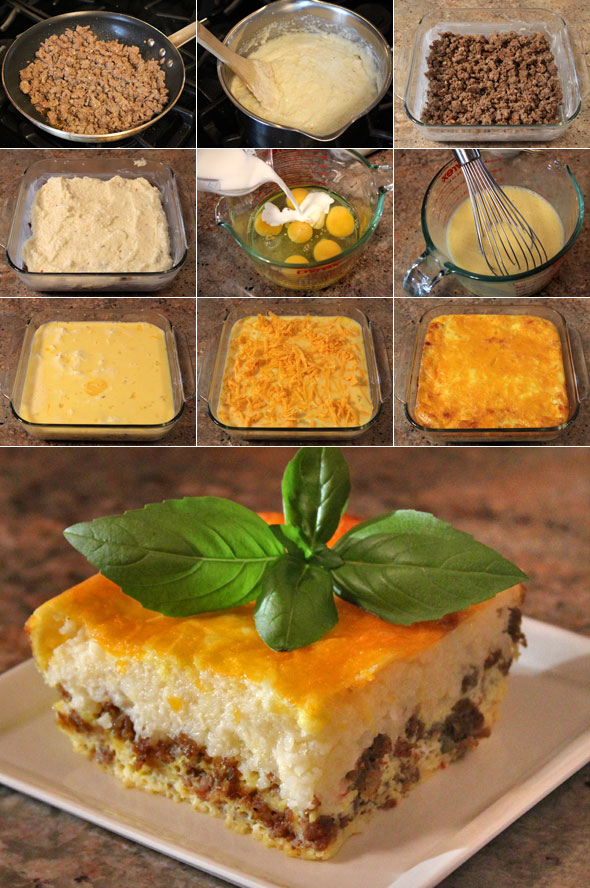 How To Make A Spicy Sausage Breakfast Bake (Grits Casserole)

Brown all sausage, breaking up as it cooks. Drain and set aside.

Add grits to 2 and 1/4 cup very-near-boiling milk and cook for 5 to 7 minutes. To grits, add butter, Parmesan cheese and sharp processed cheese spread, plus salt, pepper and any additional spices.

In a medium baking pan, layer sausage then grits mixture. 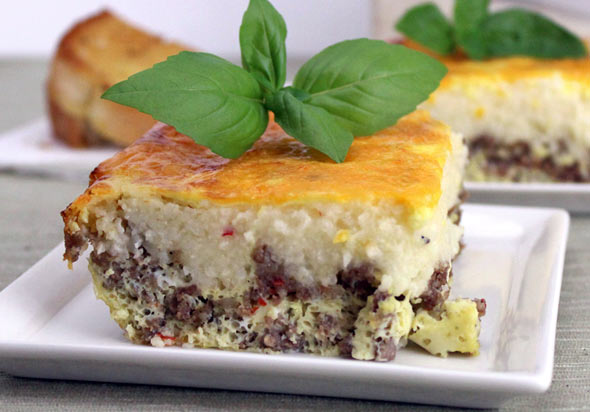 For this recipe test, I halved the recipe and used a 9x9-inch pan. I baked it in the toaster over for 45 minutes at 325 degrees. At the end, I put it under the broiler for 2 minutes to get some light browning on the top layer of melted cheese.

If desired and you're grits and sausage have cooled to room temperature, you could mix together the sausage, grits and eggs/milk to get a more even distribution of sausage throughout the casserole.

Ahh! That's-a spicy meat-a casserole! A combination of spicy and mild sausage give this cheesy baked grits dish a meaty flavor that can't be beat.


Comments About This Recipe
What do you think of Spicy Sausage Breakfast Bake?
Overall Average Rating = 4 (out of 5)
Based on 1 vote.

From Husband Cooks
My husband has been making this casserole for Christmas morning for some time now and everyone loves it. He doesn't use a spicy sausage though. He goes with mild sausage because his wife (me) doesn't really like sausage and especially spicy. I do love how this turns out and also enjoy it... plus I don't have to cook on Christmas!