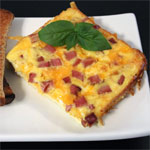 (6 servings)    Printable Version
This recipe was originally submitted with the name "Mini-Midgy's Baked Eggs". While Mini Midgy has my thanks for her submission, I decided to change the name to Ham & Cheese Baked Eggs so it would be more descriptive. This is an easy dish to make and an easy dish to modify. You can replace the evaporated milk with 3/4 cup regular milk. Cooked and crumbled bacon or sausage could take the place of the ham. You could also add 1/2 cup of sauteed peppers, onions or other veggies. As is, the recipe is very tasty and incredibly easy. Bottom Line: I liked it. (This recipe was submitted in 2003. It was tested and photographed in October 2015.) 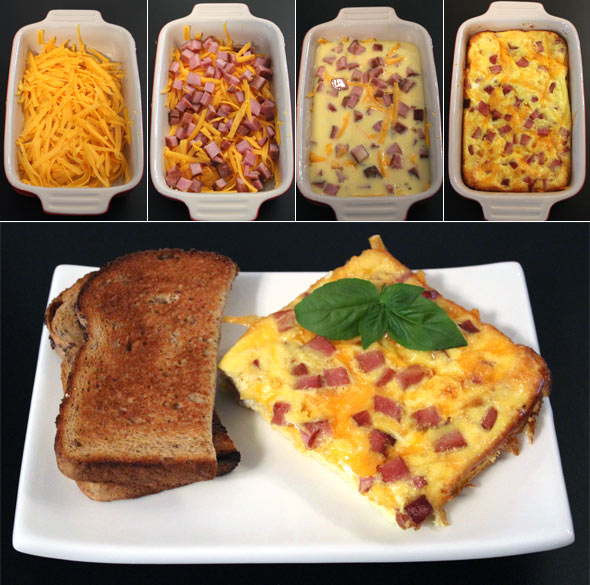 In a large bowl, beat together the eggs, milk, mustard, salt and pepper. Pour egg mixture on top of cheese.

Bake in preheated oven for 40 to 45 minutes until firm and set in the center. Let cool slightly before cutting into squares to serve.

Tip: If the top of the baked eggs are browning before the middle is set, cover baking dish with aluminum foil and continue cooking until done. 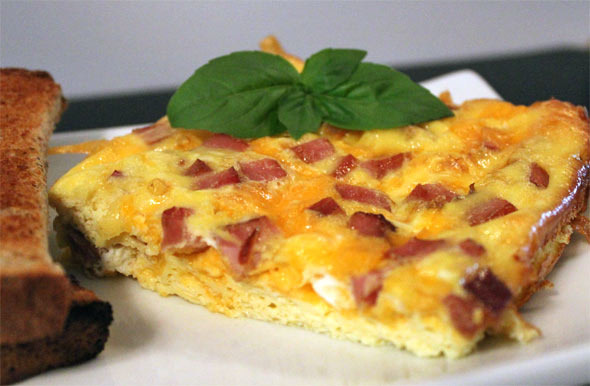 Baked egg breakfast squares. It's a very simple recipe that's nice for groups when you want to make sure all servings are ready at the same time.

Mr Breakfast would like to thank MiniMidgy for this recipe.


Comments About This Recipe
What do you think of Ham & Cheese Baked Eggs?
Overall Average Rating = 5 (out of 5)
Based on 1 vote.

From sharptomatoes (Team Breakfast Member)
My mom used to make a casserole just like this, but she would use 1/2 a can of evaporated milk and 1/4 can of cream of mushroom soup. It was delicious!