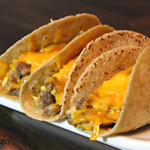 (4 servings)    Printable Version
I liked these breakfast tacos a lot, but next time I'd jazz them up a little. The sausage to egg ratio is pretty high, so I'd probably increase the number of eggs to at least 6. I think 1/4 cup each of chopped onion and chopped bell pepper sauteed with the cooking sausage would give these very basic breakfast tacos a little more personality. This makes a lot of filling. You'll probably be able to get 6 nice-sized servings. Bottom line: If you like sausage, you'll like these breakfast tacos, with or without the changes I suggest. (This recipe was submitted in 2002. It was tested and photographed in June 2015.) 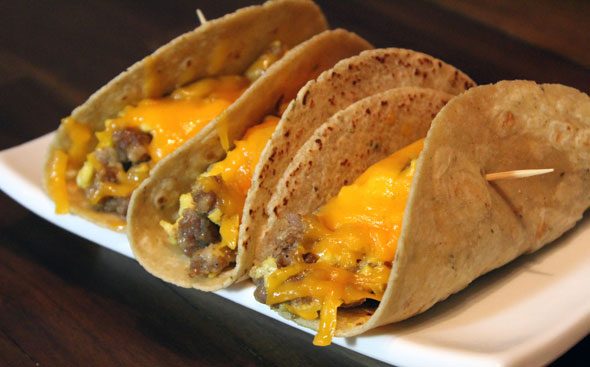 Cook and crumble sausage in a skillet over medium-high heat. When cooked through and no longer pink, drain out the excess oil and add the beaten egg. Season with salt and pepper. Stir and cook until the egg is fully set.

Warm soft taco shells in oven, then fill with the sausage and egg mixture and roll up. Sprinkle the cheese on top and put into broiler until cheese is melted. 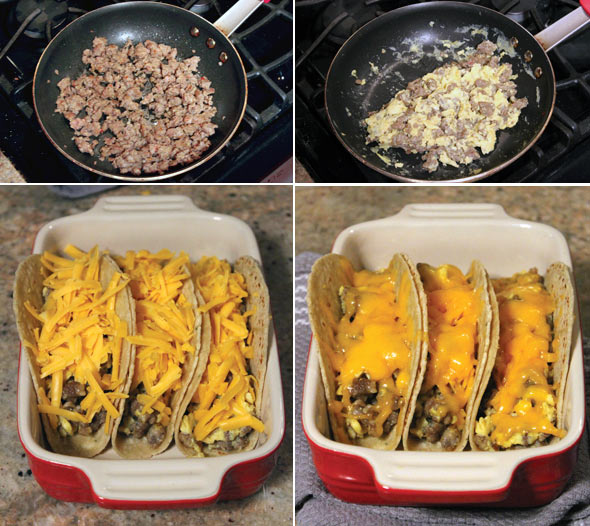 I stuck to the recipe as submitted, except I warmed my tortillas (soft taco shells) in the microwave by putting them in a damp kitchen cloth and microwaving at 50% power for 70 seconds. Instead of rolling up the tortillas, I filled them like traditional tacos. They were able to hold a lot more filling that way. 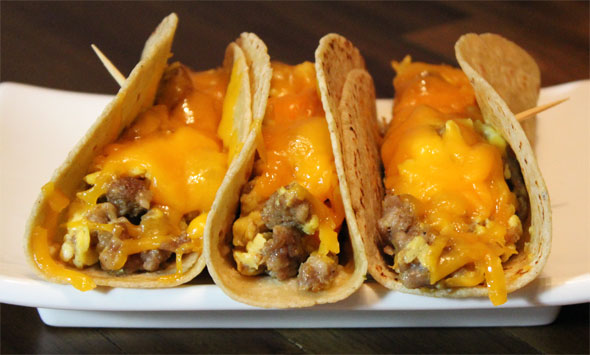 It only takes four ingredients and some salt and pepper to make these breakfast tacos. I like to use a spicy turkey sausage, but any ground sausage will work.

Mr Breakfast would like to thank oo7michelle for this recipe.


Comments About This Recipe
What do you think of Sausage Stuffed Soft Breakfast Tacos?
There are no comments yet for this recipe. Be the first! Was it good? Was it bad? Did you make it better somehow? Let the world know!