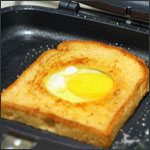 Birdies in a Nest

(1 serving)    Printable Version
Cut a hole in middle of the bread.

Melt butter or margarine in frying pan over medium-high heat.

Put the bread in the frying pan.

Drop the egg in the hole you made in the bread.

Cook by flipping until the egg is cooked to your liking.

These are also sometimes known as One-Eyed Sailors. Drop the egg into the bread very gently. You may want to crack the egg into a bowl and slide the egg from the bowl to the bread.

Mr Breakfast would like to thank johnspup for this recipe.


Comments About This Recipe
What do you think of Birdies in a Nest?
Overall Average Rating = 5 (out of 5)
Based on 24 votes.

From Shana C.
Comment under review by Mr Breakfast. Should appear within 24 hours.

From Terry N.
This is my 9 year old son's favorite weekend breakfast. He calls it Super Toast. I like it too. We sprinkle shredded cheese on at the end.

From Sophy
I usually make this and then put beans over it. It's delicious :D

From Y.E.S.
We always called it Eggs in a Frame. lol

From MamaZ
I love this stuff! It is really good. My 3 daughters love it so much I have to make to batches!

From Sammy
I have not had this in 40 years or so. Just like moma use to make!

From Wendy
This is my husband's specialty weekend breakfast, which he calls Egyptian Eyes. He uses a drinking glass like a cookie cutter to make the hole, and then toasts the round bread disks in the pan with butter along side the egg-toast. Yum!

From callie789 (Team Breakfast Member)
This is a great breakfast for anyone. It's delicious and a great way to start your day! Thanks for the recipe!

From debbie3
My kids love this breakfast.

Mama always called this a Peek A Boo egg and we loved it!

From 6ofusnrye
I used to love when my dad would make these for us.

From grammasue
When I was growing up, my grandmother made this for me. She called it a "Toad in the Hole". It is now a favorite for my grandchildren. grammasue

This is a family favourite and we called it Egg In A Hole. Try adding a spot of Worchestershire or HP Sauce. It's delicious!

From PirateGirl
We always called it "Egg-in-a-hole"!!

From LittleDee
This is the first recipe my Mom taught to cook when i was a child. I'd forgotten about. Thanks for bringing it back to mind.

From Gooberface
I tried it but tossed a piece of processed cheese on top! It's like grilled cheese with egg, tres bien (:

From Sandy
I found this recipe in a book (Diarie of a Mad Housewife) about 40 years ago. It will never get old.

From mhelenmh (Team Breakfast Member)
I'm 68 years old and have been eating eggs this way since I was a little girl. My favorite way to eat them, but we always called it "Eggs in a Hole" I like your name better.

From EggMan
I call this "Monster's Eye", i guess there's a whole bunch of different names. The point is, it's a new spin on eggs and toast, and highly recommended. Delicious!

From elviscostellofa (Team Breakfast Member)
I'm nearly 40 and I make this for myself. You can have fun with breakfast at any age. Cheers.


See All 386 Recipes For Egg Dishes