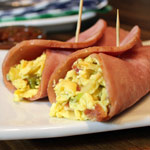 (1 serving)    Printable Version
This is clever, Paleo-friendly recipe that gives you all the pleasure of breakfast burritos without the tortillas or cheese (although I did kinda miss the cheese). The whole thing takes about 10 minutes and the two-'burrito' serving is very filling. You can eat them with a fork and knife or with your hands like a traditional burrito. I asked my guy at the deli counter to slice the ham between 1/8-inch and 1/4-inch and that worked great. The ham was flexible and easy-to-roll, but thick enough to hold the filling without breaking. If you're on a Paleo or carb-free diet, this is a must-try recipe. If you can eat whatever you want, you should still try it, but maybe add some shredded cheese to the eggs. (This recipe was developed, tested and photographed in June 2015.) 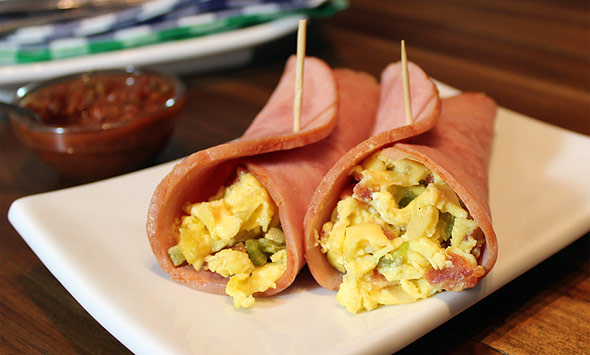 How To Make Ham-Wrapped Breakfast Burritos

Warm the ham slices in a skillet over medium heat.

In a small frying pan over medium heat, add just enough olive oil to coat the bottom of the pan. Saute the onion and pepper until slightly tender (4 or 5 minutes). Add the egg and the bacon pieces and stir and scramble until the egg is fully cooked.

Transfer ham to stacked paper towel to remove excess moisture. Fill each slice of ham with scrambled egg and fold like a burrito. Use toothpicks to get them to hold their burrito-like shape. 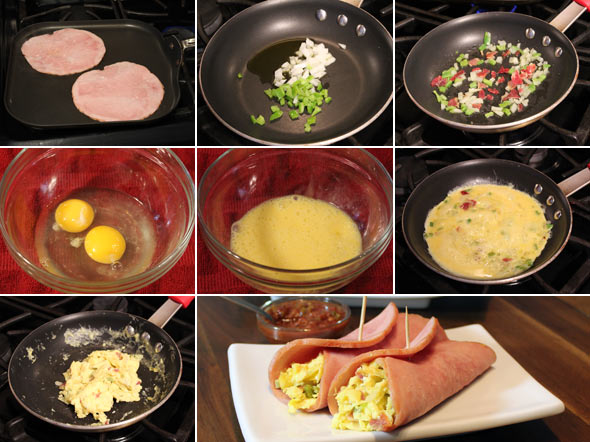 A Paleo-friendly, low-carb alternative to traditional breakfast burritos. Slices of ham are used to replace the tortilla.


Comments About This Recipe
What do you think of Ham-Wrapped Breakfast Burritos?
From pinky