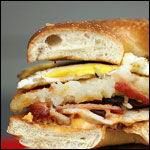 (1 serving)    Printable Version
(This recipe comes to MrBreakfast.com by way of Laura Flowers and her awesome blog called The Cooking Photographer. You'll find recipes there for every meal, all with fantastic photos. Special thanks to Laura's friend Scott ("the Dishboy") for his contribution to this recipe.)

If you are using uncooked meats (such as breakfast sausage or bacon), you should cook them first, according to your normal practice.

Add 1 or 2 Tablespoons oil to a nonstick skillet, and fry hash brown patties over medium-high heat (or per package instructions).

While the hash browns are cooking, briefly add the pre-cooked style meat(s) to the pan to sear/brown both sides. Set these aside after they are browned.

As the hash browns near doneness, fry the eggs. I like my fried eggs over hard, with the yolks broken. Do yours however you prefer. If you are making these in small quantities, then I use a single frying pan, and fry these right in the pan next to the hash browns as they finish up. If you do that, it is a good idea to turn down the temperature during this last stage so you don't overcook the fried eggs. If you are making larger quantities, then you can cook the eggs concurrently in another pan. Optimally, your eggs and hash browns reach doneness at around the same time.

Slice and toast your bagel (watch out for nasty cuts while doing this... has everyone sliced the heck out of their hand once while cutting bagels?)

Assemble your sandwich. I like to use this order: bagel, egg, hash browns, meats, cheese, and bagel.

Add salt/pepper to taste. Note that the pre-prepared hash browns already have quite a bit of salt in them, as do the meats that I generally use. So, consequently, I don't typically add salt to mine.

These work equally well using only pre-cooked lunch-type meats. If you are not using uncooked meats, you can skip the first step above.

There is a lot of heat-mass stored in those hash browns. If you've been halfway successful at having the bagel come out of the toaster at around the same time the hash browns and eggs finish cooking, your sandwich will be sufficiently hot to melt the cheese and make up for the fact that the meats you cooked at the beginning have cooled significantly. In fact, more than once I've bit into one of these and had the burning hot hash browns literally glue themselves to the roof of my mouth using the American Cheese as a type of "hot glue". Its not fun... watch out. 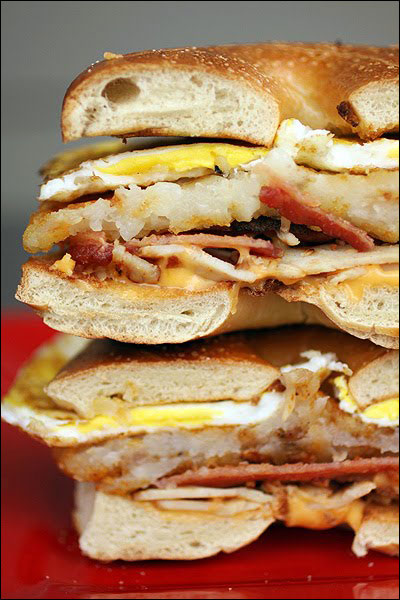 Dieters beware... this recipe has about 1,186 calories. It's a monster of a breakfast sandwich and it tastes as good as it looks.

Mr Breakfast would like to thank LauraFlowers for this recipe.


Comments About This Recipe
What do you think of Big Bagel Breakfast Sandwich?
Overall Average Rating = 5 (out of 5)
Based on 1 vote.

From Bruce E.
I make these all the time but just with cheese, egg and sausage or bacon... no lunch meat (that sounds weird). Bagels make amazing breakfast sandwiches.