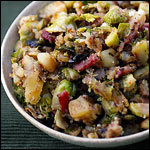 This recipe comes to MrBreakfast.com by way of Laura Flowers and her awesome (although sadly no longer updated) blog called The Cooking Photographer. You'll find recipes there for every meal, all with fantastic photos. Be sure to check out her section dedicated to bacon.

Scrub potatoes and stab all over with a fork. Place on a paper towel lined plate and microwave on high until pierced easily with a knife. Cool a bit, peel off skins and cut into large dice. Set aside.

Clean and peel outer leaves from Brussels sprouts. Cut off stems and cut into quarters. Set aside.

Cut nearly frozen bacon into small strips. (Bacon cuts easier frozen). Place bacon in a very large skillet over medium to medium high heat. Cook until crispy. Turn off heat and remove bacon from skillet with a slotted spoon and strain on paper towels. Leave bacon grease in the pan.

Clear a small area of the skillet and add minced garlic. Cook for 30 seconds or just until fragrant then mix into the sprouts. Add potatoes and warm through. Add chicken broth and hot sauce and stir.

Let potato mixture brown and crisp with chicken broth, folding the mixture occasionally. This may take awhile. Hash will be done when there are some crispy parts, the broth is absorbed, and everything is heated through. Stir bacon and Parmesan cheese into hash, taste for salt and pepper and adjust seasonings if needed.

I make this hash in a ginormous skillet. If you don't have one you can cut the recipe in half, or make in batches. 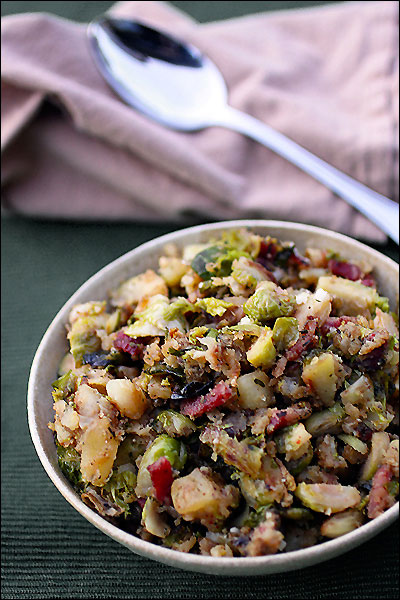 Bacon and bold seasonings make this a very flavorful dish. You might not even realize you're eating Brussels sprouts, unless you love them and then you're in for super treat.

Mr Breakfast would like to thank LauraFlowers for this recipe.


Comments About This Recipe
What do you think of Brussels Sprout Bacon Potato Hash?
Overall Average Rating = 5 (out of 5)
Based on 1 vote.

From bluegirl5 (Team Breakfast Member)
I've been wanting to try this recipe for quite a while, and finally had the chance. I was not disappointed. It was hearty and flavorful -- really tasty. I fried it up in a large cast-iron skillet, and the bottom crisped up nicely. Excellent, even for those who don't like Brussels sprouts.