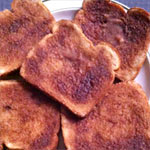 (8 servings)    Printable Version
In a large bowl, stir the sugar and cinnamon together. Add the beaten egg and mix well.

Spread butter on each slice of bread. Place slices on a baking sheet.

Spread 1 Tablespoon of the cinnamon mixture over each piece of bread.

Bake in an oven preheated to 400 degrees for 10 to 12 minutes. Keep an eye on them after 8 minutes to make sure they don't brown too much.

When you're too lazy to make French toast but want something similar, this should satisfy your craving.

Mr Breakfast would like to thank bleuhorshu for this recipe.


Comments About This Recipe
What do you think of Lazy Cinnamon Toast?
From paige

We had something very similar when I was growing up but we used brown sugar. Delish!