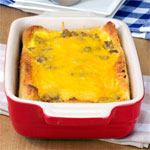 (8 servings)    Printable Version
This recipe turned out amazing. It's a great showcase for what you can do with a tube of store-bought crescent rolls. The dough forms easily into a crust. No par-baking is necessary. After the dish is cooked, the bottom and sides have a delicious, flaky, beautiful crust. The ratio of sausage and cheese to egg was just right for the filling. This dish was just as good the following day as leftovers. Final Verdict: Super easy and really tasty. (This recipe was submitted in 2008. It was tested and photographed in November 2014.) 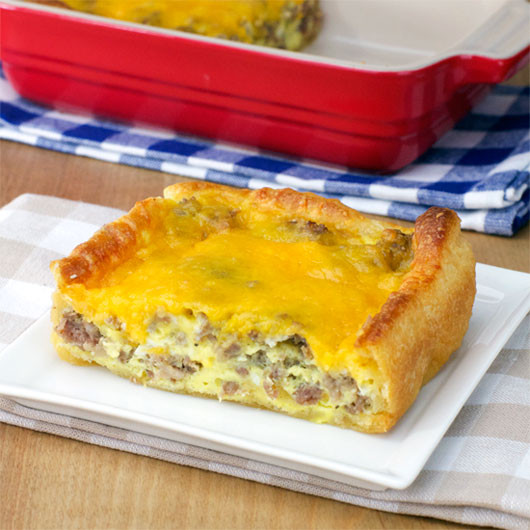 How To Make Sausage Breakfast Squares

In skillet over medium heat, cook and crumble the sausage until lightly browned. Transfer sausage to stacked paper towels to drain excess grease.

In a medium mixing bowl, beat the eggs with the milk and any seasonings you decide to use.

On a lightly-greased 13 x 9 baking dish that's at least a full inch deep, unroll the crescent dough and press it into the bottom while creating an an edge along the sides that's about 1/2 inch high.

Sprinkle the sausage evenly over the dough. Pour the egg mixture over the sausage. Top everything with an even layer of cheese.

Bake for 15 minutes on an oven pre-heated to 400 degrees. Once the outer crust is golden brown and cheese if fully melted, the dish is done.

Allow dish to cool at 5 minutes. Cut into squares and serve. 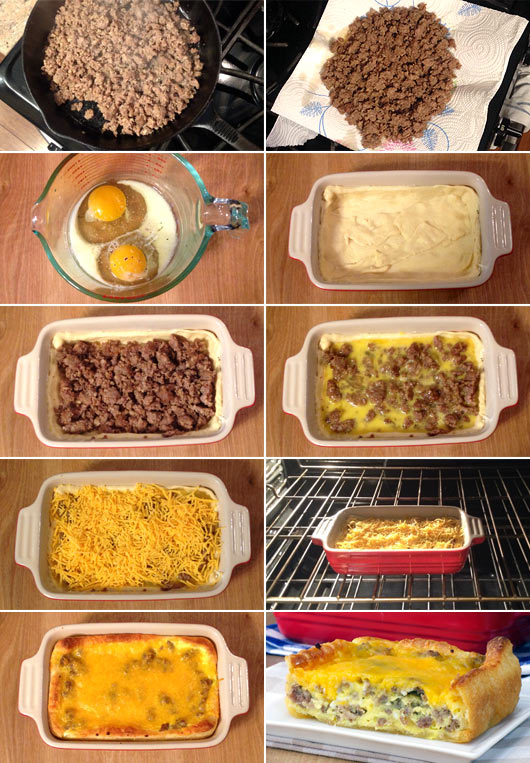 Ten minutes into cooking, I covered the pan with aluminum foil as I found the crust was browning a little too quickly.

If after 15 minutes the dish is not firm (jiggles slightly when shaking), cook 5 minutes longer or until firm. You can also finish it off with 1 minute in the microwave. 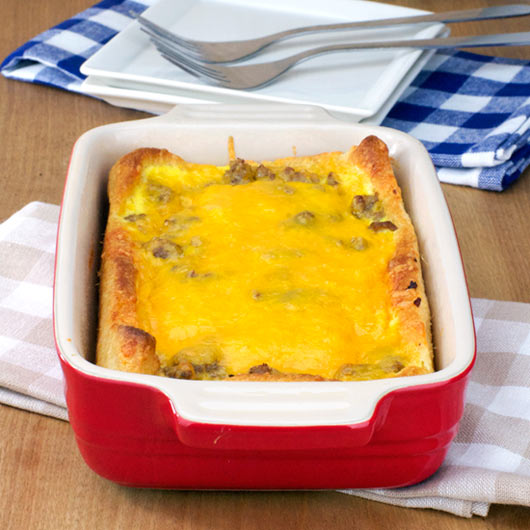 This is a great sausage casserole recipe that uses fewer eggs and a crescent roll crust so it can be cut easily into squares. Very quick and convenient.

Mr Breakfast would like to thank dustie for this recipe.


Comments About This Recipe
What do you think of Sausage Breakfast Squares?
There are no comments yet for this recipe. Be the first! Was it good? Was it bad? Did you make it better somehow? Let the world know!