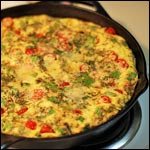 (4 servings)    Printable Version
In a medium bowl, beat the eggs with the salt. Add the chopped ham, cheese and parsley. Stir and set aside.

In a skillet over medium-high heat saute the onion and zucchini in 1 Tablespoon of butter until just tender - about 2 minutes. Add the tomatoes and cook 1 more minute. Reduce heat to low to keep warm until use.

In a separate OVEN-PROOF skillet over medium-high heat, fry the potatoes in 1 Tablespoon of butter. Stirring only once or twice, cook for about 8 minutes or until nicely browned.

Re-stir the egg mixture and pour over the potatoes in the skillet. Cook for about 5 minutes or until the egg is nearly set.

Transfer the skillet to the broiler and broil for two minutes or until the top of the frittata is golden brown. Remove from broiler.

Allow frittata to cool for about 5 minutes. Slice into wedges and place even amounts of the cooked vegetables over each wedge to serve.

Perfect for breakfast or brunch. To make it super healthy, replace the eggs with egg beaters egg substitute and use canola oil instead of butter.

Mr Breakfast would like to thank spiff for this recipe.


Comments About This Recipe
What do you think of Ham And Potato Frittata Supreme?
Overall Average Rating = 5 (out of 5)
Based on 1 vote.

From qayetc (Team Breakfast Member)
Very unique to me. Serving the veggies on top made a delicious & lovely presentation. I will take this idea & tamper with it by varying the herbs & veggies, many, many times. By the way, this recipe was my intro to mr. breakfast. Lovin' it, Rena