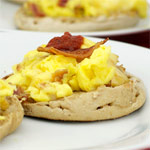 (4 servings)    Printable Version
This recipe was submitted to the site back in 2007. After an examination of my refrigerator this morning (June 2013), I found that I had the exact ingredients to make this (and not much more... time to hit the grocery store). I used a smokey Mozzarella and decided to use this recipe to top English muffin halves to create a sort of super fast Italian Scrambled Eggs Benedict. I enjoyed this dish very much. One word of note: a little marinara goes a long way. I found it better to top each serving with a couple teaspoons rather than to drench the eggs in sauce. As an experiment, I also tried salsa instead of marinara for one serving and that worked great too. 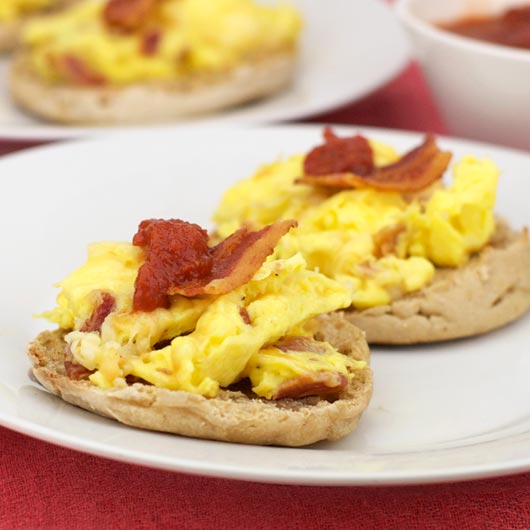 How To Make Bacon Mozzarella Eggs

In a large skillet coated with cooking spray over medium heat, scramble the 6 eggs together.

When the eggs are nearly set, add the bacon pieces and scramble some more. Season to taste.

Sprinkle the cheese evenly over the top. Remove from heat and cover. Let it set 1 minute or until cheese is melted.

For a great finishing touch, spoon just a little marinara sauce over each portion. Nothing fancy - just a little spaghetti sauce from a jar warmed 20 seconds in the microwave works great. 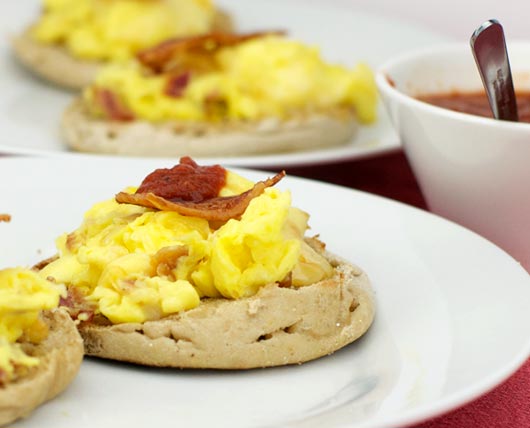 This is a quick and easy way to whip up an Italian-style breakfast. If you have a little more time, try sauteing a little onion and red pepper in the skillet with a Tablespoon of olive oil (about 5 minutes) and then add the eggs to that and start scrambling.


Comments About This Recipe
What do you think of Bacon Mozzarella Eggs?
Overall Average Rating = 4 (out of 5)
Based on 1 vote.

From Walter H. P.
Just made this - but without the bacon. It was pretty good... wouldn't have thought to use spaghetti sauce like that. It worked okay, but I think you would have to add onions and peppers to make it great.