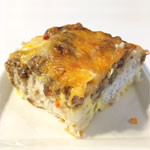 (4 servings)    Printable Version
My thanks to Holly M. for submitting this recipe. I wanted, but have been unable, to reach her to find out why this dish is called an Amish Breakfast Pizza. It doesn't seem particularly Amish (refrigerated biscuits?) and it's much more of a casserole than a pizza. Name confusion aside, this is a tasty breakfast. The photos make it seem like there might be too much biscuit in relation to the other ingredients. That wasn't the case. It's just that the biscuits rose up to be very fluffy. While all the other ingredients were great, the tenderness of the biscuits was the star for me. The only change I would make in the future would be to increase the number of eggs from 5 to 6. If you're looking for a fun way to use a tube of biscuits, you should consider this Amish Breakfast Pizza. (This recipe was submitted in 2007. It was tested and photographed in April 2017.) 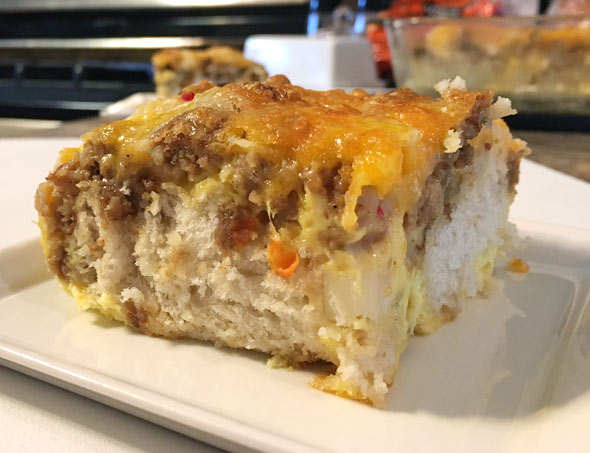 How To Make An Amish Breakfast Pizza

If using freshly shredded potatoes, squeeze as much of the liquid from them as possible- by placing them in a dish towel and squeezing. If using frozen potatoes, allow them to thaw first. Putting them in the microwave for 2 minutes usually does the trick.

Cook and crumble sausage until nicely browned; drain. Take your favorite refrigerated store-bought biscuits, separate into individual biscuits and place them in bottom of baking pan. Spoon meat over biscuits, then spread potatoes and cheese over meat. 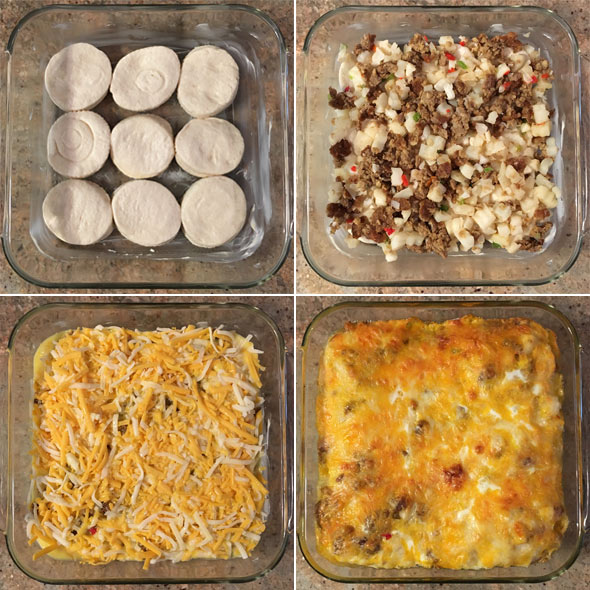 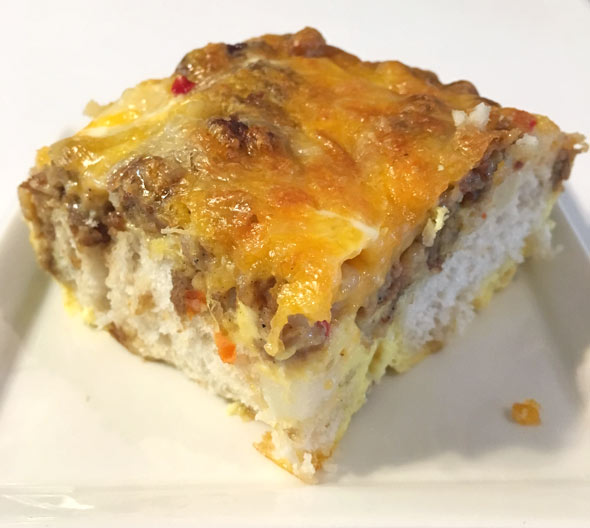 
Comments About This Recipe
What do you think of Amish Breakfast Pizza?
Overall Average Rating = 5 (out of 5)
Based on 3 votes.

From addison72
First off, this is is delicious. Secondly, why 'Amish'? That's funny, because I never think of the Amish riding around in their buggies with refrigerated biscuits. Any idea why it's named that?

From I. M. Walrus
I made it this morning. The whole family was pretty pleased. I used the steps in the comment from "cook4david" and pre-baked the biscuits for 5 minutes and added the cheese right at the very end. It was good.

From cooking4david
Almost perfect! The taste was amazing, but the biscuits absorbed some of the egg mixture. Next time, I will pre-bake the bisquits a couple minutes and save half the cheese to melt on top at the end.

What makes this recipe "Amish"? Anyone know?