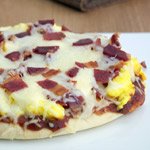 (4 servings)    Printable Version
This was a great breakfast. It took about 25 minutes from start to finish. I cooked the bacon in the toaster oven. That took about 15 minutes at 375 degrees. After the bacon had cooked for 8 minutes, I preheated the oven and made my scrambled eggs on the stove. All the components were ready at the same time and then it was just a matter of putting the pizzas together and cooking them for 6 minutes. I'm anxious to try variations. I think it might be even better with Cheddar cheese and salsa. (This recipe was submitted in 2006. It was tested and photographed in April 2014.) 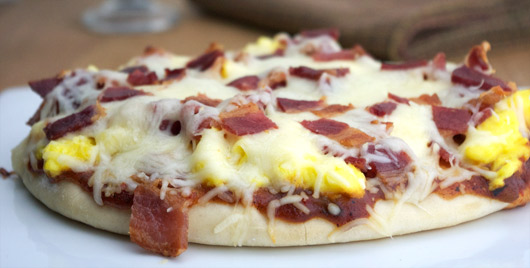 How to Make Breakfast Pita Pizzas

Preheat the oven to 375 degrees.

Place the pita breads on an ungreased baking sheet and spread the pizza sauce evenly over each. Set aside.

In a medium bowl, combine the eggs, milk, salt, and pepper; beat well.

In a large skillet with a light coating of cooking spray, scramble the egg mixture over medium-high heat. When eggs are just set, spoon evenly over the pita breads.

Sprinkle each pita evenly with crumbled bacon, followed by the cheese.

Bake for 5 minutes or until the cheese is melted. 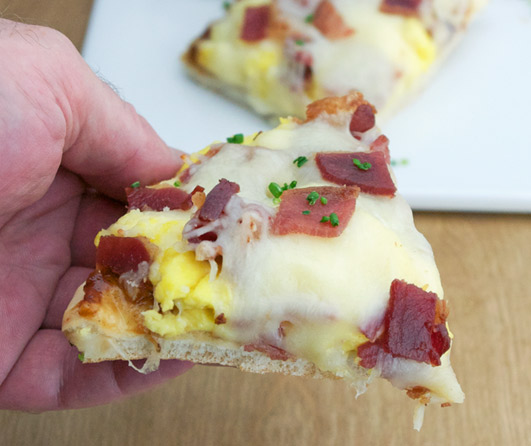 This is a fun and easy recipe. Try adding sauted pepper, cooked sausage or ham for tasty variations. Or add them all!

Mr Breakfast would like to thank ILoveBagels for this recipe.


Comments About This Recipe
What do you think of Breakfast Pita Pizza?
Overall Average Rating = 4 (out of 5)
Based on 1 vote.

From Malia
This recipe is great, although with salsa instead of pizza sauce, its even better =)