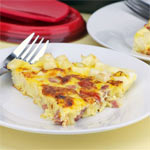 (4 servings)    Printable Version
This recipe was originally submitted to the site ages ago in 2002. Cut to July 2013 and it just so happened that all I had in the kitchen this morning was hash browns, ham, eggs and cheese. What to do? I rediscovered this recipe. Low on groceries, I was forced to use Southern-style cubed hash browns and an Italian Cheese blend. I found some cherry tomatoes in the garden and chopped those up. In the end, I liked this recipe, but I can see how it would be even better with shredded hash browns and Cheddar cheese as the recipe submitter intended. Let me know in the comments below if you give it a try. I'm off to the grocery store...

How To Make A Hash Brown Frittata

Arrange the hash browns around the edge of a square or oblong shallow oven proof dish and place in the preheated oven (350 degrees) for 10 minutes.

Meanwhile beat the eggs and milk together and season well. Add the ham, tomato and cheese.

After 10 minutes rearrange the hash browns so that they line the edge of the dish, slightly overlapping if necessary. Pour the egg mixture into the center.

Return to the oven and cook for 10 -15 minutes or until the has browns are crisp and golden and the egg mixture is set. 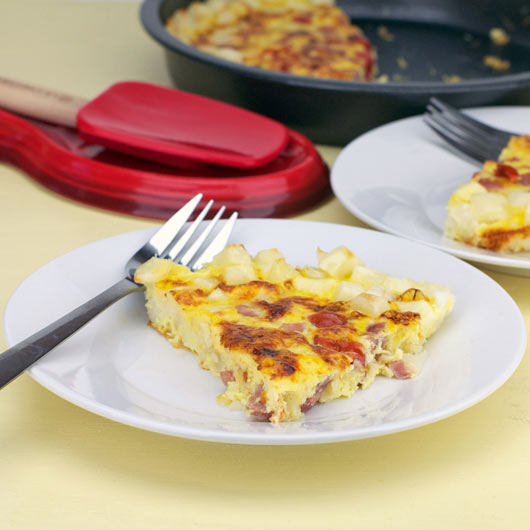 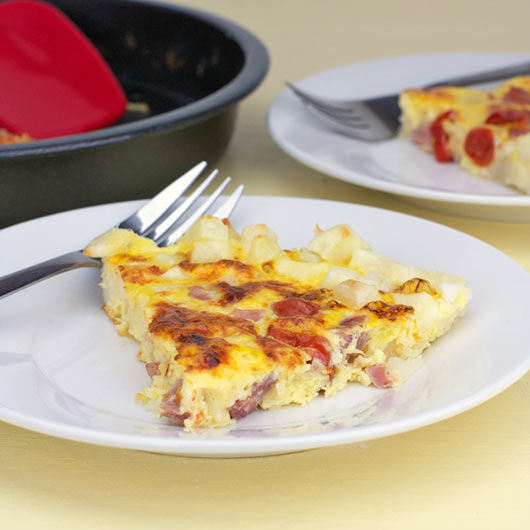 The best of breakfast in one easy-to-make dish: eggs, hash browns, ham and cheese.


Comments About This Recipe
What do you think of Hash Brown Frittata?
Overall Average Rating = 5 (out of 5)
Based on 1 vote.

From Exec Farmer
Very good, but I added a small spanish onion.