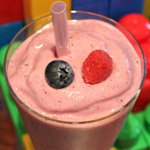 (2 servings)    Printable Version
When this recipe was first submitted, I considered deleting it. It's too easy and specific ingredients aren't specified. But then I got to thinking... that's the beauty of smoothies. They ARE incredibly easy and you can use any ingredients you want. The idea of frozen fruit is something every smoothie lover should consider. I keep sliced bananas in the freezer so I won't need ice which can make a smoothie too watery. For this recipe test, I just threw together everything I had laying around the kitchen: frozen bananas, blueberries, raspberries and pineapple and a little fresh strawberry and pear. I didn't use quite as much milk as the recipe states. I like a thicker drink, so I used just enough milk to cover my fruit in the blender. The result was terrific... proving that smoothies are versatile and pretty hard to mess up. (This recipe was submitted in 2006. It was tested and photographed in September 2015.) 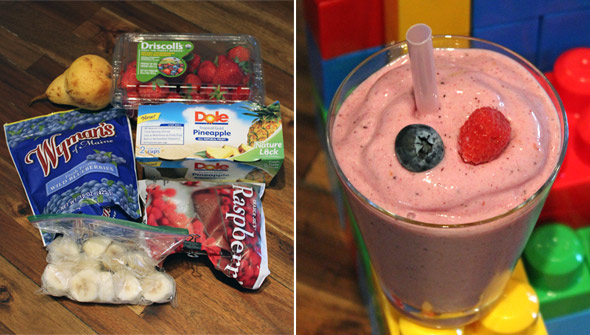 How To Make Iced Fruit Smoothies

Pour two cups of skim milk into the blender.

Put frozen fruit into the blender (as much as you think you want, also keep frozen). Blend on liquefy until smooth.

Enjoy! It probably sounds too easy, but if you use fruits you love then you really don't need any other ingredients.

A painfully basic smoothie recipe. You don't have to use any ice cubes if you use frozen fruit. Combo freezer packs containing multiple kinds of frozen berries work best for this one.

Mr Breakfast would like to thank Abanna for this recipe.


Comments About This Recipe
What do you think of Iced Fruit Smoothie?
Overall Average Rating = 3 (out of 5)
Based on 3 votes.

From Oldenburg
Trader Joes sells a mix pack of frozen raspberries and blueberries that worked great. I also added a frozen banana that I was saving to make muffins. I was surprised it tasted so good, but I also can imagine it's be even better with vanilla or pineapple yogurt.

From billy bob
I didn't particularly care for this recipe.

I haven't tried it, but I'm putting my strawberries into the freezer now!

From Lisa P
I enjoyed this drink!! Lisa P, Fl