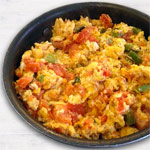 (2 servings)    Printable Version
This is probably the most popular egg dish in Turkey and certainly the most popular one that can be made without uniquely Turkish ingredients that can be hard to find. Try it, and I think you'll like it, but it's guaranteed to taste better with the Mediterranean or the Bosphorus over your shoulder, so come to Turkey for the original. - Note From Recipe Submitter Bounaparte 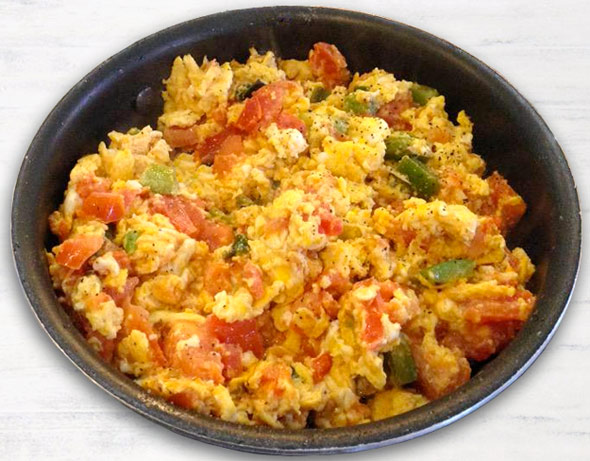 How To Make Turkish Menemen

Peel and cube tomatoes. Then cube other ingredients (fine) and saute in small pre-heated skillet with olive oil until slightly wilted (don't totally kill the crunch) then over low heat crack eggs into the skillet and scramble cooking until eggs are fairly firm but the entire dish is slightly moist due to the vegetable juices.

A Turkish scramble of eggs, tomatoes, peppers, onion and olives. If desired, you can also add crumbled Feta cheese. Just add a Tablespoon or two when the eggs are almost fully set.

Mr Breakfast would like to thank Bounaparte for this recipe.


Comments About This Recipe
What do you think of Turkish Menemen?
Overall Average Rating = 5 (out of 5)
Based on 10 votes.

Wait, I thought it was made with ground beef? That's how my neighbors make it?

From Simmuns
Sultana ARZU - it's butter NOT olive oil.

I thought menemen had sucuk in it.

I suggest to put one part of garlic instead of onions...

Actually this is not a total correct recipe. It should have more olive oil added and actually a little water to the veggie mix BEFORE you break the eggs in. Not an authentic version.

From Cakemountain
I threw some tidbits of meat in the veggie mixture before the eggs, and it turned out delicious.

From Blue
I love menemen. In Turkey I enjoy adding a few slices of Sucuk to the recipe :)

This tastes ridiculously good when properly made.

From Rora
Have a slice of crusty French/Italian/Turkish bread with it. Yummy!!!

From Fav T. Meal
This is my favourite Turkish meal! Quick and easy. I love it!!!

From lifeisgood (Team Breakfast Member)
It is easy and fast. You must try his and also as delicious as other Türkish meals... I love TURKEYYYYY... :)

From Trust Me
Add 3 tomatoes instead of 2. I replaced the olive with Turkish cheese, put the cheese in before the eggs - trust me its yummy!

Little bit of salt and definitely some garlic in there. Lovely.

From Inanc
Try adding salt/blackpeper during cooking AND a bit of fresh diced parsley is good on top of the dish.

From yo
So delicious!